Check out some basic facts about Hawke's Bay, our environment and economy. 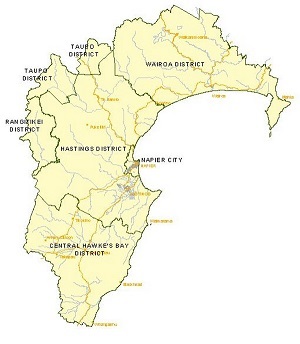 Hawke’s Bay is a region of New Zealand located in the east of the North Island on the Pacific Ocean coast.

Hawke’s Bay has a mild Mediterranean climate. Summer can be sunnier and hotter than the average for New Zealand with long dry periods and droughts occurring regularly. Winters are mild, although frosts and occasional snow do happen.

The main cities are located close to each other - Napier on the coast, and Hastings 17 km inland. Smaller towns are Wairoa, Waipawa and Waipukurau and other small settlements are found throughout the region.

Hawke’s Bay’s environment has been highly modified through generations of forestry, farming and development. We want to protect and enhance what remains. Fortunately there is a public eagerness to restore native bush, improve water quality, and produce crops in keeping with our climate and soil.

People can get involved by joining in with organisations that are doing habitat protection and enhancement work. Locals can help out with a planting day during winter. Or do what they can to reduce, reuse, recycle around their homes.

Hawke’s Bay has a low amount of industry but several significant national and international companies are based here.

As major river flow across Hawke's Bay, flood protection is an important function of the regional council to protect homes, industry, productive land and cultural/environmental values.

Napier Port is a major export and transport hub on the East Coast and is owned by Hawke’s Bay Regional Council through its investment company, HBRIC.  Council is currently considering how best to fund the Port's growth.