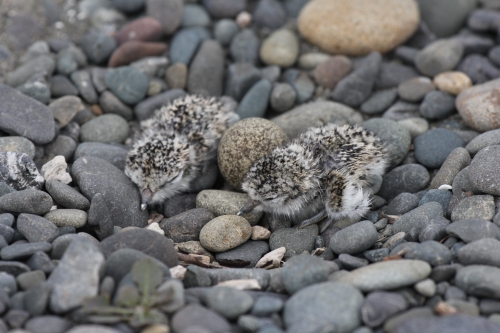 A recently completed survey of Hawke’s Bay river birds is encouraging, and shows that shorebirds continue to thrive on rivers in the region.

The survey is carried our every year for three years along 286 kilometres of the Tukituki, Ngaruroro, and Tūtaekurī rivers to monitor state and trend in numbers and diversity of river birds.

Hawke’s Bay Regional Council Terrestrial Ecologist, Keiko Hashiba, says the great results from this year’s survey – the second of three - are similar to what was found last year for bird numbers.

“It’s awesome to see that two years in a row our rivers are strongholds for many of our threated shorebirds. This is fantastic because many of these species are reported declining elsewhere, so we are delighted that some Hawke’s Bay bird populations remain steady.

Ms Hashiba says many of the birds along our rivers are classified as At-Risk and Threatened by the Department of Conservation, for example the banded dotterel.

“2,564 adult banded dotterels were counted during the 2019 and 2020 surveys, an 11% increase from the 2019 count. This number represents an estimated 13% of the global population and the count shows that the Tukituki River supports the largest population of banded dotterels in New Zealand.”

The population counted during the 2020 survey is the largest number of banded dotterels counted on these rivers since counts began in 1962.

The Regional Council’s Team Leader Schemes, Antony Rewcastle, says it’s great to see how important our rivers are to supporting the birds that rely on them.

“Hawkes Bay has the privilege and responsibility of having the Tukituki and the Ngaruroro rivers in the top three rivers in the world for supporting unique banded dotterel populations. We can support these populations by protecting and enhancing habitats, including animal pest control and minimising disturbance from people, vehicles, and dogs during nesting the nesting season.”

The Regional Council’s flood protection works to maintain open efficient channels (like gravel raking)  may have a positive impact on shorebird populations alongside our strict ecological management regime.

“We only rake outside the breeding season, and if work is required during the season, an ecologist surveys the area and marks any nests to avoid disturbing birds.

“Healthy and functioning biodiversity is one of the Regional Council’s priorities for Hawke’s Bay and we work hard to look after both the river ecology and our community,” he says.