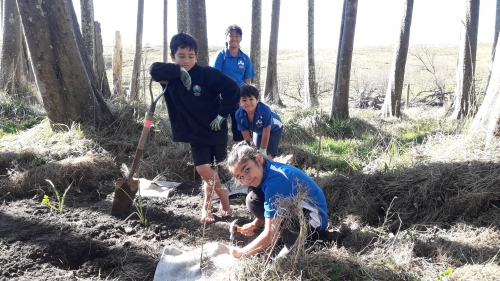 Hawke’s Bay Regional Council has been working in partnership with The Conservation Company, landowners, Omakere School and the Department of Conservation to restore two wetlands.

Team Leader Principal Advisor Biodiversity Biosecurity Mark Mitchell says these wetlands were formed in basins and are tiny remnants of what once were extensive mosaics of swamp and alluvial forests that blanketed the area.

He says it is vital to protect these small remaining remnants as they are lifelines for the endemic species that live within them.

“A feature of both areas are stands of kahikatea, including some fairly old trees. We are working with The Conservation Company to restore them and are seeing results already,” says Mr Mitchell.

“A good example of this was discovering the New Zealand tadpole shrimp which has survived in the Orea wetland. This small, slightly weird looking creature is a throwback to ancient times 190 million years ago and is considered a living fossil. The species is continuing to decline nationally due to loss of habitat and is now listed as nationally endangered.

“Environmental restoration is hard work so it’s great having such dedicated landowners and local communities protecting these sites. No one entity can do it alone, these partnerships are essential and are already bearing fruits. We're very grateful to have landowners on board such as Sam Duncan, who owns the land where Orea Swamp is, we couldn't do it without them,” says Mr Mitchell.

“Controlling willows and other weeds, planting natives, fencing areas off and controlling animal pests is hard work, but it’s immensely pleasing to see results already starting to show with natural regeneration starting to occur and the return of native birds and invertebrates.  Recent surveys have also shown both areas to be foraging grounds for our native long tailed bat.”

The Regional Council is working to enhance our environment, and this project is one of many showcasing our commitment.