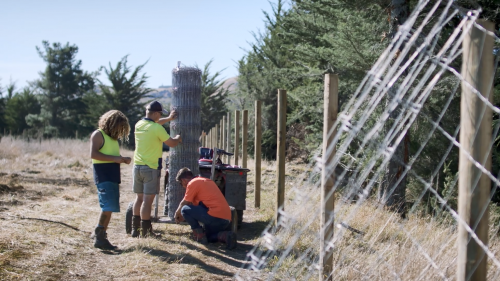 Hawke’s Bay dairy farmer Ivan Knauf says he’s thrilled to be able to fence a significant 90-hectare wetland surrounded by native bush on his farm, thanks to a $4.2 million Jobs for Nature partnership between the Ministry for the Environment and Hawke's Bay Regional Council.

Over two years, the Hāpara Takatū project will establish 195 kilometres of new riparian fencing to exclude all classes of stock from vulnerable waterways across the region; reducing erosion, enabling riparian plantings to grow and creating jobs.

Knauf’s wetland fencing is one of 70 projects across Hawke’s Bay, funded by the Jobs for Nature Hāpara Takatū project. QEII National Trust and Fonterra also made financial contributions to fencing off Knauf’s wetland.

The project has also generated more jobs in the region, with fencing contractors expanding their workforce.

Knauf has established four kilometres of fencing around the wetland to keep out feral deer and other animals from feeding on native plants, and trees.

“This fencing is a crucial first step to restore the wetland and improve freshwater quality. The next step is to manage willow trees, blackberries and other weeds to allow the native bush to flourish, and native birdlife to return,” says Knauf.

Secretary for the Environment, Vicky Robertson, says it’s wonderful to see landowners across Hawke’s Bay getting involved in the project.

“Central to the new essential freshwater package is the principle of Te Mana o Te Wai, putting the health of freshwater first. This year World Environment Day (5 June) calls for urgent action to restore damaged ecosystems. This project is a great example of putting that into practice.”

Hawke’s Bay Regional Council terrestrial ecologist Keiko Hashiba says the wetland on Knauf’s land is a critical biodiversity area for indigenous wetland flora and fauna who have lost the majority of their habitats across the region.

“Ten percent of Hawke’s Bay used to be covered in wetlands – around ten times the size of Napier. There is only four percent of the original extent left, and most of the wetlands we have today are very small and isolated. A wetland of this size is very uncommon and that’s why it is so exciting to protect and restore it.”

“The restoration of this wetland will mean it will become a vital habitat for threatened species, a better functioning ‘kidney’ for filtering contaminants from the land, a water reservoir and carbon storage for our region.”

“To us this is about partnering with our community, not just to fence off waterways for water quality benefits, but also enhancing biodiversity, recreation, mahinga kai – those things that are so important to us as New Zealanders.”

The Government’s $1.245 billion Jobs for Nature package aims to create significant environmental benefits and bring thousands of people into nature-based work to help accelerate the recovery from the impacts of COVID-19.