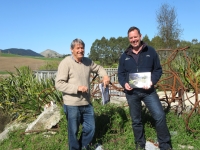 A new book on Pekapeka wetland – or Pekapeka swamp as it used to be known – is in production and the search is on for old photos or illustrations that could be used to show the history of the wetland.

“The Regional Council has photos of the wetland as we cleared the willows and improved the water flow, but we have very few pictures from earlier than 1980, and if anyone has older photos we’d love it if these could be shared with us for the new book,” says Hawke’s Bay Regional Council’s Asset manager open spaces Steve Cave.

“If your family has had a connection with Pekapeka, you may have a photo of shooters in a maimai or people gathering flax or eeling. Perhaps there’s a painting of the surrounding farmland showing the swamp as it used to be. We’d like to know about it and talk over if we can make use of the picture for the book.”

Garth Eyles, former HBRC land manager who oversaw the initial planning and restoration of Pekapeka wetland, has written the text for the new book.  He’s still passionate about the park and wants to see its history well represented in the book to come out early next year.

“The Pekapeka book will look similar to the popular books on Pākōwhai and Tūtira Regional Parks, as this series has proved to be a worthwhile way to permanently capture knowledge about these special areas,” says Garth.

Steve Cave and Garth Eyles would appreciate seeing any photos or material that people might have, and learn about the stories behind the pictures.  Photo/illustration owners would be given full credit in the book.