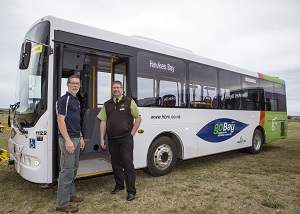 There is great news for Bay View residents wanting to catch the bus – now they can.

The service will be available six days a week, four times a day linking Bay View with Napier. It has been timed to meet the needs of commuters and shoppers

He says school students will also be able to use the new Bay View service to connect with other services at the Napier Library.

“Students can leave Bay View at 7.15am and connect to another service in plenty of time for school,” says Mr Adams.

Meanwhile a number of other changes are being made to the GoBay bus services from Monday 26th September, including a new 40 minute express commuter service linking Napier, Taradale, Hawke’s Bay Hospital and Hastings.

Mr Adams says the express service will be particularly useful for hospital staff wanting to bus to and from work, as well as Napier people heading the Hawke’s Bay Hospital for an appointment.

He says there will also be new Sunday services for Flaxmere and Havelock North and increased frequency on the route around Karamu and Parkvale.

Mr Adams says even more good news is there are no fare increases this year and some far are actually coming down.

“If you travel over two zones between Napier and Hastings you can expect to see cheaper fares from the end of September.”

Here is a video giving a quick overview of the new services.