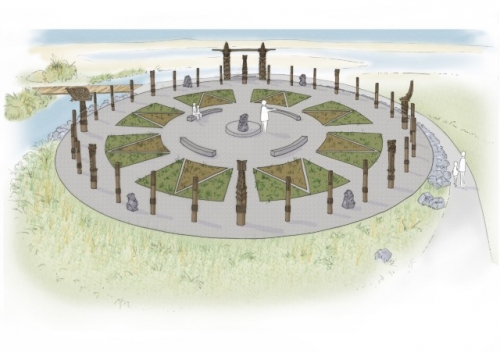 The contract has been awarded to build key elements of Waitangi Regional Park’s estuary enhancement. Work is due to start early next month.

At Wednesday's meeting of the Hawke's Bay Regional Council Tenders Committee, the civil works element of this project - with a total value of $1.1 million - was awarded to Fulton Hogan Ltd. The work will start the week of 3 October and is to be completed by 27 January next year, in time for 2017 Waitangi Day celebrations.

The contracted civil works include entrance road formation from State Highway 2, car park construction, celestial compass construction, garden beds and platforms for the first four carved pou. The remaining carved pou will be erected over the course of the year to align with the movement of the sun. During the build phase, current access will be restricted, and this will be notified separately.

Open Spaces Manager Steve Cave is delighted to see this project given the green light.

"Every time we go out there for a beach clean-up, we collect half a ton of rubbish. I would like to think with these works completed, the rubbish dumping and disrespectful use here will be a thing of the past," says Mr Cave.

Te Matau a Maui Voyaging Trust Chairman Piripi Smith says, "I'm thrilled to see the main construction part of this project kick off. As are many other supporters who have put a lot of their time into this project, I look forward to seeing this prominent coastal area transformed over the next couple years."