Take Care With Dogs On Rivers 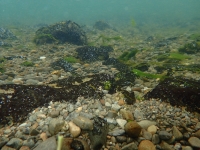 With summer coming, plus the combination of lower river levels and warmer water temperatures, Hawkes Bay Regional Council is recommending that dogs should be kept under control at the region’s braided rivers because of the risk of the potentially toxic algae, Phormidium, being present.

Phormidium is an algae that occurs naturally in shallow rivers. It occurs in back country rivers as well as low land rivers and is not just a low land river issue.  Phormidium algae looks like a blackish mat that forms on rocks.

Hawke’s Bay Regional Council staff do a visual check for the presence of algal mats, when doing weekly water quality sampling, but this by no means takes in the whole river. HBRC staff are considering using a drone flyover more regularly to check for algae in longer reaches of the rivers where it often occurs.

However river users can check for themselves by looking for the black mats where Phormidium tends to grow - in fast-flowing parts of the river known as riffles.

“Research still cannot tell us what triggers Phormidium to start to produce toxins.  It’s made more complicated because toxins may be present in one part of the mat, but not in others. The best advice we can give is to treat as potentially toxic all Phormidium growth in the water and drying mats on the banks,” says Anna Madarasz-Smith, HBRC’s water quality scientist.

Dogs appear to be attracted to the drying mats, and are known to get sick from either investigating the mats or drinking water with algae in it.  A dog died last summer after being at the river although it was not definitively linked to algae.

“Unfortunately, vets tell us that it’s not a clear cut diagnosis to make the link with algae ingestion, as the symptoms of Phormidium poisoning in dogs closely resemble heat exhaustion,” she said.  Dogs can get very hot as they are closer down to the heat coming off the gravel alongside a river.

Dog owners should take their pets to a vet quickly when they show any unusual symptoms or behaviours.

The water quality monitoring programme is managed jointly by Hawke’s Bay Regional Council with the Public Health Unit of Hawke’s Bay District Health Board.  Local councils also take a role in ensuring the public are well-informed about water quality.