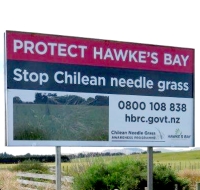 The ramping up of the Chilean needle grass awareness campaign is supported by billboard recently installed alongside SH2 on the Takapau Plains.

Hawke’s Bay Regional Council Biosecurity Officer, Alice McNatty, says this move aims to encourage the general community as well as landowners to be vigilant for this plant.

“We need to stop the spread to protect our environment and our agricultural industry,” she said.  “Landowners should be looking out for Chilean needle grass because identifying an infestation early makes it easier and less expensive to contain and control the plant.”

Chilean needle grass is easiest to identify in spring and early summer, when distinctive purple seed heads become visible.  The seeds are dart like, with a sharp seed head and a long, kinked tail.  It’s most likely to be found where there is less competition from desirable pasture species, such as dry hard hill country, areas with light soil, heavily grazed pasture and bare ground.

Chilean needle grass can be spread by movement on contaminated machinery, vehicles, feed and stock.  To prevent spread, landowners should only allow clean vehicles and machinery on to their property, and make sure any stock or feed brought onto the farm have not come from an infested property.

If you suspect you have found Chilean needle grass, please contact Hawke’s Bay Regional Council immediately, as staff can visit the property and help identify the pest.