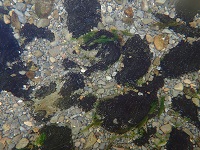 “We are concerned about the potential health risks for people and dogs as some reaches of the Tukituki now have 80-90% coverage of phormidium which can become toxic,” says Anna Madarasz-Smith, senior environmental scientist.

Mrs Madarasz-Smith says that the settled weather, along with high temperatures, long days of light and lower flows have created perfect conditions for the algal growth.

“The affected reaches of the Tukituki we have noticed during our regular monitoring are around Tennents Road, Patangata and Horseshoe Bend (near Kahuranaki Road).  However people need to look at the whole river bed as mats can lift and drift downstream.”

With lower water flows in rivers and streams, 12 water take bans are in force in the catchment with only 5 locations still available to take water. On the Tukituki River itself five bans out of the seven are in force.

The algae occurs naturally in all rivers, stream and lakes but in summer can grow to cover large areas in shallow, stony rivers. Not all algae is toxic but phormidium (blue-green algae) can become toxic, even when dry.

Algal mats dry out alongside the river and should not be touched. Dogs particularly should be kept away from them as they are particularly susceptible to the toxins.  The mats can vary in colour from brown/black when in the water to a pale brown/whitish colour when dry, and are identifiable by a strong musty smell which dogs will naturally want to investigate.  More detail on what the mats look like are at www.hbrc.govt.nz, #swimming where info sheets are under ‘Related Documents’.

Veterinarian advice is to take a bottle of fresh water and a bowl to give dogs a good drink of water before they run around, so they are less tempted to drink from the river. Any dogs or animals that appear unwell or are sick after being at a river should get prompt veterinary attention.

Hawke’s Bay District Health Board Medical Officer of Health advises that anyone displaying signs of illness after being in a river bed should seek medical advice from a doctor immediately. People who come into contact with the toxic form of the algae may experience vomiting, diarrhoea, skin rashes and numbness or tingling around the mouth.