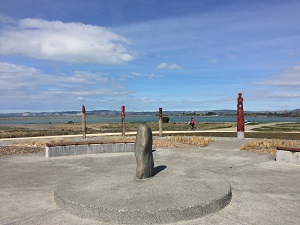 More pou are being welcomed to the Ātea a Rangi – the 50 metre wide Star Compass at Waitangi Regional Park -  on Friday 22 September, which is the Spring Equinox.

A further eight carved Pou and four solstice rocks will be welcomed at a 6am dawn ceremony on 22 September.  The spring equinox marks when day and night are of equal length as we head into summer, the sun rises due east and sets due west.

The transformation of this area of the Waitangi Regional Park is part of a long-term collaboration between the Ātea a Rangi Educational Trust, members of the waka Te Matau a Māui and the Hawke’s Bay Regional Council.

Nathan Foote, Trustee of the Ātea a Rangi Educational Trust, believes it is important for the next generation to get in touch with the seasons and understand, through outdoor experiences, the relationship to the sun, moon and stars in the sky.

“The period around the spring equinox is important for marking the time to plant crops and the time of migrating Pahore and Inanga (whitebait). It is also the time that migrating birds return to Aotearoa such as the Pīpīwharuaroa (Shining Cuckoo), Koekoea (Long Tailed Cuckoo) and Kuaka (Godwit) and we still use these birds today in navigation like our ancestors did,” says Nathan Foote.

The additional carved posts include four Kāinga and four Ngoi pou, which are used mark the rising and setting points of the stars, sun and moon to navigate waka on the open ocean.

Four solstice rocks will be placed to mark the northern and southern most limits of sunrises in the East and sunsets in the West, and sit outside the ring of pou on the concrete platform.

The Trust will also install a Waharoa (gateway), and remaining eight Pou which will complete the circle of 32 in time for the summer solstice in December 2017.

Steve Cave, HBRC’s Open Spaces Manager says the star compass has quickly become a popular feature in Waitangi Regional Park on the coast. “This is a major asset for the people of Hawke’s Bay, representing our past history and a unique aspect of the estuary enhancement. Feedback has been terrific, and already we are seeing more respectful use of the site and a growing number of people wanting to get involved in and support the restoration project.”