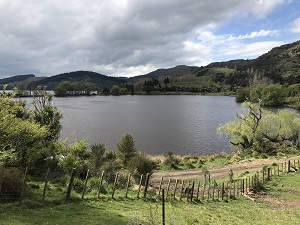 Regular water monitoring is showing an air curtain being trialled in Waikōpiro Lake at Tūtira this summer appears to be working well.

The trial is being undertaken as part of Te Waiū o Tūtira (the milk of Tūtira) project, which is a partnership between Maungaharuru-Tangitū Trust and Hawke’s Bay Regional Council aimed at improving the water quality and habitats in Waikōpiro and Tūtira Lakes. Pressurised air is being pumped through a 50-metre pipe tethered close to the bottom of lake and across the deepest part, creating an air curtain. It increases oxygen levels at all depths throughout the lake by creating a circulation current, much like bubblers in a fish aquarium.

HBRC Water Quality and Ecology Scientist Dr Andy Hicks says the lake is fully saturated with oxygen throughout the water column, which is great news. However he says the temperature is 15 to 16oC throughout the lake and rising, which is concerning and being closely monitored.

Dr Hicks says prior to the installation there was a brown discolouration of the water, caused by a non-toxin producing algae, this algal ‘bloom’ has been diluted but not dissipated.

“We are not sure whether the air curtain will remove the existing bloom. It’s like a boulder rolling down a hill, it’s much easier to prevent the boulder from starting its roll than it is to stop it,” says Dr Hicks.

“In future, aeration will begin in August rather that September to reduce the risk of blooms forming in the first instance”.

He says while initial results are encouraging, the real test for the trail will be to see if it can prevent the development of blooms of potential toxin producing cyanobacteria.

“So while the air curtain is doing its job well, its influence on lake ecology will only become clear as we come to the end of summer.”