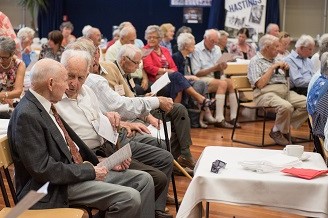 The annual afternoon tea for survivors of the 1931 Hawke’s Bay Earthquake will be held again on Sunday 4 February 2018.

“We still have a lot of people in our communities who were youngsters when the terrible earthquake struck on 3 February 1931, and although they are getting on now, they love this opportunity to get together,” says Napier's Deputy Mayor Faye White who chairs the organising group.

“The organisers and sponsors enjoy creating this special event for this very special group of people, where they can catch up with old friends, chat, and share memories.”

The afternoon tea will again be hosted from 2 to 4pm at Napier Boys’ High School in their main Henderson Hall in Chambers St.

As numbers of survivors are diminishing, the final afternoon tea (the 88th) will be held in 2019.

Earthquake survivors who have previously attended will receive their invitations before Christmas. Anyone who has changed address or who has not previously attended and would like to be invited, can contact Hawke’s Bay Regional Council Reception 06 835 9200.

Because the afternoon tea is for the people who experienced the 1931 earthquake, anyone  descended from survivors who wishes to commemorate their family members can do so at the civic commemoration in Hastings.