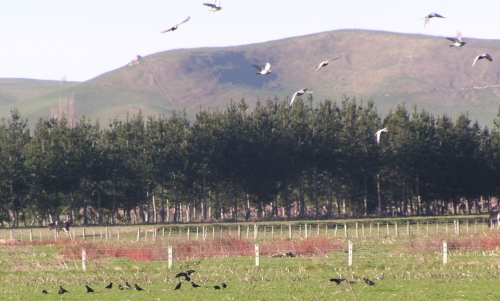 Over the past four months, around 900 rooks have been removed from Hawke’s Bay following calls from farmers seeing birds on paddocks and crops.

Hawke’s Bay Regional Council contracts the control work to Rural Pest Services. Over the past five years, Jake Bowcock of Rural Pest Services has seen a 20% decline each year in the population of rookeries, with some rookeries being completely eradicated.  The goal is to control the spread of rooks below State Highway 5.

“For some farmers, rooks do a lot of damage to crops that are just emerging from the ground,” says HBRC’s Land Services Manager, Campbell Leckie.

“In Hawke’s Bay’s current dry period, all crops and grass paddocks become very valuable so removing rooks is another factor in ensuring farmers and growers can manage their land into spring.”

In September, Hawke’s Bay Regional Council and Rural Pest Services staff will be identifying active rookeries or nesting sites for the annual aerial campaign across the region. Currently within the region there are 330 active rook nest sites.  This is well down on the 2,790 active rook sites treated ten years ago during 2006/2007.

Any new rookeries reported will be controlled by HBRC.  Farmers will need to advise on any powerlines or wires nearby that could interfere with helicopter operations, as well as any sensitive stock in the area that may get frightened by helicopter noise.