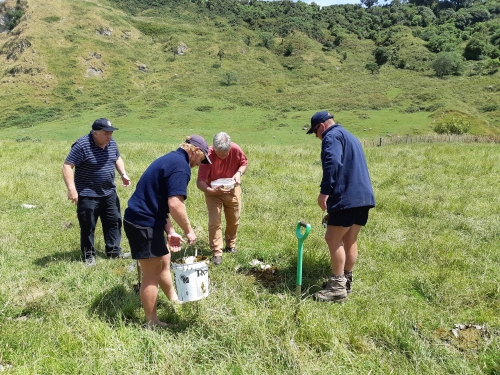 A new breed of farm worker has been released in Māhia today, Dung beetles. These beetles are paid in dung, work 24/7, and improve farms and their environments.

Farm Manager on Pongaroa Station, Bevan Parker, says the beetles are a great addition to the farming community.

“We’re excited to be releasing over 10,000 dung beetles in Māhia over the next couple of days, the largest number of beetles to be released in Aotearoa at one time. We’re spreading them round the farms that are part of the Whangawehi Catchment Management Group,” says Dr Simon Fowler, the Manaaki Whenua Landcare Research scientist in charge of the programme

“Four types of dung beetle are being released because they’re active in different seasons and can cover each other when friends are napping. They act like miniature bulldozers by packing dung down tunnels they dig up to 60 cm directly under the dung pat. They lay their eggs in dung balls. They make the dung pats disappear faster and become blended into the soil profile,” says Beef + Lamb New Zealand’s Hill Country Futures Programme Manager, Eleanor Linscott.

“This release is part of a bigger project looking to future proofing the farming business, and community and environments. We’re looking at sustainable farming practices, and researching different ways of working to become more sustainable – like getting these little guys on the farms working for us,” says Regional Council Project Manager – Hotspots, Nicolas Caviale - Delzescaux.