Planning for a different climate in Hawke’s Bay 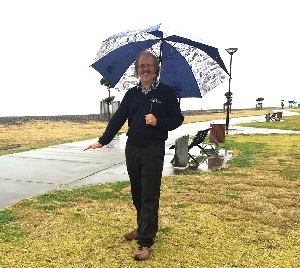 “I’ve lived on Hawke’s Bay’s coast for 20 years and love it, but we have a challenge ahead to manage our coastal risks,” says HBRC Engineering Manager Craig Goodier.

Craig is a member of the technical team giving his expertise to the Clifton to Tangoio Coastal Hazards Strategy 2120.

This multi-council and tāngata whenua project group recently completed its latest phase of work to map hazards, and identify communities and assets at risk along the HB coast.

Craig left Canada 23 years ago with his Kiwi wife, leaving the cold and snow behind. His association with Hawke’s Bay and the Regional Council has spanned more than 20 years, living at Westshore, enjoying water sports like surfing and windsurfing.

Craig’s role typically involves analysing the possible effects of flooding and development, such as at Te Awa and Parkland estates, or managing the flooding aspects of major and minor rivers on the Heretaunga and Ruataniwha Plains. He carries out flood forecasting in the lead-up to weather events. He’s also heavily involved with the Civil Defence team giving warnings to coastal communities during large swell events, as well as farmers and river users when forecast rain threatens to become a problem in river systems.

The joint Coastal Hazards strategy began in 2014, and Craig has been involved mapping the likely effects of coastal inundation. His work shows possible effects on coastal communities, based on the climate now, and scaled to include the effects of climate change in 2065 and 2120.

“The way I think about it, we have technical ability to help the public decide what’s feasible, affordable and what the likely effects may be. It is up to the region’s ratepayers to collectively decide how ongoing coastal risks will be managed. We present options to be considered and then carry out decisions made by council, whether that be ‘hard-engineered’ options such as groynes, or to help property owners plan for the effects on coastal properties.”

HBRC has set up an online mapping tool to help landowners check any property in the coastal study area, covering three hazards: inundation, erosion and tsunami.  Two recent public meetings at Westshore and Te Awanga saw between 50 and 80 people at each meeting talking through the research findings and examining maps in relation to specific properties.

“Most attendees were appreciative of efforts to keep them informed of the results.” said Mr Goodier, “Our work is ongoing and long-term, so it’s important to keep a perspective on what is important now, as well as plan for future generations.”

“Last year’s Cyclone Pam took some of the beach crest off at Cape Coast, but we’ve been listening to the Haumoana/ Te Awanga Walk On Water (WOW) Group, and working with them on a solution to restore it to a level that provides protection.”

The coastal hazards strategy is being developed by Hastings District, Napier City and Hawke's Bay Regional Councils, and tāngata whenua groups.
There is more information about the project at www.hbcoast.co.nz.

Photo caption:
On one of Hawke’s Bay more unusual rainy days, Craig Goodier, HBRC Engineering Manager, shows the height that coastal inundation could reach on Napier’s Marine Parade by 2120, due to climate change and during a severe storm.