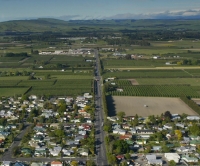 Businesses and the public have an opportunity during August to comment on a draft reviewed Heretaunga Plains Urban Development Strategy (HPUDS).

In 2010, the 30-year strategy was adopted by Hastings District, Napier City and Hawke’s Bay Regional Councils.  Five years on, the first review has been initiated by the HPUDS Implementation Working Group, consisting of representatives from the three councils plus mana whenua.

A draft of the reviewed Strategy plus all background reports are available online at an updated website - www.hpuds.co.nz.  The public consultation will run until 22 August.

“Although a public consultation phase is not formally required for this review process, we believe public feedback will be helpful in updating this key strategy for the plains,” says Fenton Wilson, HBRC Chairman who chairs the Working Group.

“Over the past few months, the Working Group has considered a number of background research papers, and we’re now keen to hear the views of businesses, interest groups and the public on the draft strategy.”

Comments on the draft revised strategy can be submitted online at the website, emailed to hpuds@hbrc.govt.nz or posted to Hawke’s Bay Regional Council.

Research has included a ‘stock take’ of a range of local and national factors which may have influenced the strategy since 2010.

•             Consider councils’ requests for alternative sites to include in the strategy.

One of the more significant review findings reported to the Working Group is that, although overall residential greenfields land supply is sufficient, there are some immediate supply issues at Havelock North and Frimley (Lyndhurst) and potentially at Te Awa in Napier.

Cr Fenton Wilson says, “Recent projections tell us that we will need to cater for an increase of 8250 residents and an extra 10,600 homes over the next 30 years.  Those homes will be a mix of greenfield subdivisions, infill and rural living.”

With an aging population, there is a predicted increase in demand for smaller retirement dwellings. Over the 30-year HPUDS planning period, there is expected to be a demand for about 3,340 more retirement units than exist at the present time – about 40% of future housing demand.

The Heretaunga Plains Urban Development Strategy (HPUDS2010) was first developed as a collaborative approach by the Hastings District Council, Napier City Council and Hawke's Bay Regional Council to managing urban growth on the Plains from 2015 to 2045.

The HPUDS Implementation Working Group undertaking the review consists of the three council’s mayors, councillors and chief executives plus two mana whenua representatives.  They are supported by an advisory group of council staff.

The Heretaunga Plains area covered by HPUDS includes Napier and Hastings cities and outlying suburbs, plus the small coastal settlements from Whirinaki and Bay View to Waimarama and rural settlements on the fringes of the plains such as Maraekakaho, Puketapu and Pakipaki.

The website for the Strategy and 2016 Review has been updated at www.hpuds.co.nz.