The 2020 drought in Hawke’s Bay highlights how critical it is to have a plan for regional water security. We’re aiming to make sure Hawke’s Bay has long-term, climate-resilient and secure supplies of freshwater for all.

Why is freshwater important?

We need freshwater to grow our food, maintain the integrity of our natural environment, for recreation, households and businesses.

However, our freshwater is coming under increasing pressure. As a region we want more and more of it, yet the more we take the greater the cost to our streams, waterways, rivers and the wildlife that lives in and around our waterways.

Ultimately, we all need freshwater to survive, but it is a finite resource that we must treat and manage with the utmost respect, and share equitably, if we are to sustain our region’s wellbeing.

We need to better understand Hawke’s Bay’s freshwater resources and make decisions as a community on how we protect and manage it.

What is the regional water security programme?

We are working with local iwi, councils, and the wider community to advance these projects.

What are the projects?

A whole-of-region freshwater assessment is underway, and investigations into Heretaunga water storage and managed aquifer recharge in Central Hawke’s Bay.

We are thoroughly investigating our region’s freshwater resources, including our demands on water supply in to a future challenged by climate change.

We are looking at how groundwater systems can be supplemented during periods of high water flows and small-scale water storage designed to offer environmental protections during dry periods.

There’s more information about each project in the links below.

How an aquifer works

Hawke’s Bay has never before completed a top-to-bottom assessment of all of its freshwater – how much it has, how it is used, who benefits from it, future demand and our ability to deliver secure supplies in the future.

The assessment will for the first time, provide a comprehensive analysis of our freshwater, including the growing gap between how much we want and how much we have.

The report will consider the freshwater requirements of tangata whenua and provide engagement opportunities for the Hawke’s Bay community to contribute to long-term freshwater management planning.

It will look at the range of options to ensure secure supplies including water storage, water conservation, more efficient water use and land use practices.

The assessment is currently being reviewed by councillors, mana whenua and key stakeholders. It will be made public early in 2023, alongside a summary with key findings and an education programme to increase understanding of water security issues.

The Provincial Development Unit has allocated $5 million to the Hawke’s Bay Regional Council to accelerate investigations into a water storage development in the Heretaunga region for environmental, productive and municipal purposes.

The funding includes $1.3 million for a feasibility study on developing a lowland stream flow maintenance scheme using above-ground water storage. If the study confirms the project’s viability, the PDU will provide a further $3.7m of loan funding to help pay for the construction of new water storage infrastructure.

Initially the project will focus on expansion of an existing water storage scheme on private land at Te Tua Station directly above Bridge Pa.

We have heard the the concerns of the Bridge Pa community in particular. Any investment in securing water storage to support our environment, either through expanding the Te Tua facility or developing new storage facilities, is proposed to be paid for by the users of water in the catchment.

You can read our media release here

Here is footage of the Te Tua water storage facility

Managed Aquifer Recharge, or MAR, is a set of physical tools that enables us to capture high-quality water from rivers and streams during high winter flows and use it to purposefully recharge aquifers, mimicking nature as closely as possible.

As part of Hawke's Bay Regional Council's Regional Water Security Programme, we'll be carrying out a 3-year trial in Central Hawke's Bay to determine whether MAR is a viable storage option.

If successful, MAR could help to hold the line for the environment in the face of climate change but also provide a viable option to store more freshwater to meet the increasing demands of growing populations and thriving industry and agriculture.

How does Managed Aquifer Recharge work?

For the MAR trial, we'll be taking water from the Waipawa River during high flows and moving it through underground pipes to a recharge site. There, water is discharged into a series of big leaky ponds where it settles and seeps down through the various layers of dirt and gravels into the shallow aquifer below the Ruataniwha Plains.

We're also looking to recharge the deeper aquifer by pumping high quality water down a specialised bore. We’ll be testing recovering some of the water through this same bore in summer to demonstrate that storing and recovering water in this way is possible.

This is a small-scale trial to monitor how MAR works on the Ruataniwha Plains – measuring the impacts and benefits so we can determine how effective MAR can be in our local environment and how best to apply it in other locations.

Yes, and very successfully. Places such as Spain, India, the United Kingdom, and Africa and throughout the United States have used MAR extensively for over 60 years in various capacities, developing new techniques to improve water supply over that time.

While a new method for New Zealand, MAR has been trialled in both Canterbury and Gisborne. Canterbury is now rolling out further sites to increase sustainable water management across key catchments. 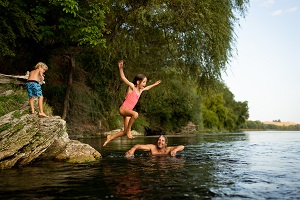 "Fresh water is Hawke’s Bay’s most precious and valuable resource. There is nothing else that plays such a critically important role to the social, economic and environmental future of our region.

The ultimate wellbeing of our communities and our people depends on how we manage our freshwater resources.”