Wetlands are permanently or temporarily wet areas that provide habitats for plants and animals that are specially adapted to wet conditions. 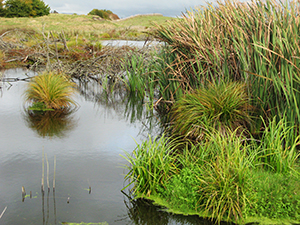 Wetlands once covered large parts of New Zealand and in Hawke’s Bay large parts of the flat plains and the valleys were wetlands before they were drained for use as farms, roads and cities.

Wetlands have important functions and many efforts are being made in Hawke’s Bay to protect and enhance existing wetlands, restore those that have been neglected and create new ones.

The main wetlands in Hawke’s Bay are:

Why wetlands are important

Wetlands are as they describe – “wet land” – and form a critical boundary between the land and the water.  In Hawke’s Bay we have examples of many types of wetlands. The types of plants and animals found in wetlands vary depending on whether it is coastal or inland freshwater, how much water flows in and out, how long it stays there, how deep the water is, how warm it gets and what nutrients and sediment are in it.

Wetlands are important because they:

What we are doing about wetlands in Hawke’s Bay

Volunteers - It’s exciting that in Hawke’s Bay, many hundreds of people care about wetlands and volunteer to help dig, plant and weed wetlands.  We could not restore these ecological areas without their valued help! Many people continue to monitor changes in their wetland projects, and form permanent care groups, such as at Whangawehi at Māhia.

The Regional Council has an important monitoring and research role.  We have begun a state of the environment programme for freshwater wetlands in the Tukituki Catchment as a pilot area. We are collecting ecological information so that the region better understands the flora and fauna, nutrient status and hydrology of these areas.  We also monitor the larger wetlands and lakes

the Regional Council has enhancement and maintenance programmes for wetlands for which we have responsibility at Tūtira, Pekapeka, Taipo, and Waitangi.

There is more information on types of wetlands and restoration on the National Wetland Trust of NZ pages.

Napier City Council has plans to improve Ahuriri Estuary, its surrounds, public use and the quality of stormwater entering the estuary environment from the city.