Our science team monitors the water quality at popular swim spots over summer so you can check if it's safe to swim where you like to go. Our results go to the national LAWA.org.nz website so you can see if it's 'good to go' wherever you are in NZ. You can also find out about toxic algae.

Find out about Toxic Algae

Can I swim here?

Every Monday, from 1 November to 31 March, we check 38 beach and river sites all over Hawke's Bay, updating the results on this page by mid-week.

On this page you can find whether it's 'good to go' at popular spots in Hawke's Bay. For more detailed information and facilities about each swimming spot, click here, or on any site to go to the LAWA website.

Reminder about swimming after rain

Heavy rain flushes contaminants from urban and rural land into waterways and we advise you not to swim for 2 – 3 days after heavy or prolonged rain – even at sites that generally have good water quality. Check that the water is clean and clear before taking a dip too.

If it's been raining heavily, our best advice is to stay out of the water for 3 days. A handy guide is - if you can't see your toes when standing knee-deep in water, then water quality is not the best for a swim.

Clive River, Waipuka Stream and Puhokio Stream are generally less suitable for swimming or recreational use, due to higher potential bacteria levels. The Clive River and Puhokio stream are sampled fortnightly as they have permanent signs up warning of the health risks. the Regional Council, community groups and landowners are working to improve water quality in these places.​​

Watch some of our  videos

The District Health Board will put up signs at sites at where toxic algae has the potential to be a risk to human health. This information is also relevant for dog health for which the Regional Council is responsible. Conditions can change quickly so for information on the current status see the information below.

Phormidium is a potentially toxic algae that can be a risk to human and dog health. It is found in rivers all year round but presents a risk to humans and dogs during the hotter months of the year. Because the risk of finding it is low but the potential impact of eating it is high for an animal or child, we’ve created this dashboard to give you information to make the best decision for yourself, your family, and pets.

Find out more in these two videos

What is toxic algae?

Toxic algae, sometimes called Phormidium, occurs naturally in shallow, stony rivers, like the Tukituki, and looks like a mat that forms on rocks. It can be black, brown, green, or grey. When the river level drops, the algae can be seen on stones or at the sides of rivers which dry in the sun.

Yes, dogs love the strong musty smell of toxic algae mats, which is a problem as it draws them in. Dogs will often eat the algae if given the chance, and only a small amount can be lethal.

How can I keep safe?

What to look out for

To find out more about phormidium and its effects, check out: 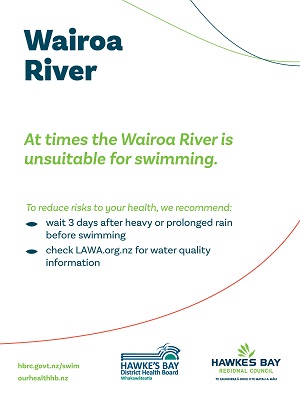 Advisory Signs for the Tukituki Catchment

It is known that the Tukituki catchment is prone to high levels of Phormidium during the summer months.

Advisory signs are at sites where there is a high likelihood that Phormidium will reach levels that make it difficult to avoid at some time during a typical summer. The risk of contact with Phormidium can change in matter of hours, so it is important for the  public to be vigilant. Fortunately, Phormidium is easily identified and advisory signs feature pictorial guides.

The District Health Board are responsible for advisory signage, and updates are posted on the Regional Council and the DHB’s Facebook pages.

While some of the highest levels of toxic algae have been found in the Tukituki catchment, it can grow in other rivers in the region, so always keep a look out, particularly in stony bottomed rivers.

The risk map is based upon the assumption that the worst environmental conditions for Phormidium growth will occur this summer.

Toxic algae does not always produce toxins but we recommend that humans and dogs avoid physical contact. There are 3 possible pathways for the toxins:

1. Ingestion of the algae itself. This is the greatest risk, some dogs are attracted to rotting mats that are out of the water. While the chances of illness are not high, the consequences of ingestion can be severe as even the smallest amount of black mat algae has the potential to cause severe illness or death.
2. Skin contact with toxic algae. Some humans can come out in rash if they make contact with bare skin, and there is a theoretical risk of a young child transferring the toxins to their mouths if they handle it.
3. From river water. It is thought to be rare for animal and humans to get sick from toxins in the water. However, national guidance suggests that risk increases when coverage of the river bed is over 50% in the wetted area i.e. Red alert.