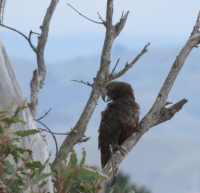 During this winter a kaka has been frequenting an area around the Napier Botanical Gardens.

This native bird is a threatened endemic species of parrot and is seldom seen in urban areas.

“We last saw a kaka on the Hill in 2010, so it is great news to see one spending a bit of time in town. There is plenty of food for them there, and the reduction of possums in the suburb would have helped,” says Rod Dickson, HBRC Biosecurity advisor.

In Hawke’s Bay there is a small population of kaka at Boundary Stream and in the Kawekas, as well as Maungataniwha. Cape Sanctuary staff have also reported seeing wild kaka around their aviaries.

The kaka seen on Napier Hill has no leg bands, so Department of Conservation think that it is a wild bird (ie not raised in captivity) that has come down from the ranges to find food and shelter from the colder temperatures.

“Kaka typically come to lower altitudes to look for food, and over time there may be a trend with more kaka coming closer to town,” says Dave Carlton of the Department of Conservation.