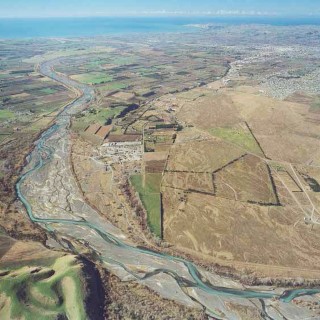 The 2009-2013 assessment of the State and Trends in Groundwater Quality in Hawke’s Bay was presented to yesterday’s Hawke’s Bay Regional Council Regional Planning Committee meeting by HBRC groundwater scientists.

HBRC Group Manager Resource Management Iain Maxwell says the report shows while there are isolated areas, such as shallow bores or around the Poraiti limestone, that have issues associated with land use, the water in the main Hawke’s Bay aquifers is safe to drink.

He says HBRC has invested close to 7.5 million dollars in the last five years undertaking investigations, monitoring groundwater quality and quantity and developing groundwater models in the main productive aquifers of the region. The information gathered is used to inform policy effectiveness and development and resource consent decision making.

The report says 78% of the 40 monitoring sites around the region comply with the maximum acceptable values for drinking water. Those that don’t are affected by naturally occurring iron, manganese and hardness. These are particularly elevated in the Poukawa (limestone) Wairoa and Mahia aquifer systems.

In the last five years 88% of monitored sites were more than 90% compliant with E. coli indicator levels. Elevated E. coli is sometimes found in shallow monitoring bores, which are susceptible to contamination by pathogens like E. coli as the depth of soil above them means they have limited ability to filter out contaminants.

The report states that 17.5% of Hawke’s Bay sites had increasing nitrate-nitrogen levels. The largest proportion was in the Ruataniwha aquifer system, followed by Mahia and Heretaunga. The Ruataniwha and Heretaunga Plains have more intensive horticulture and agriculture, while Mahia has lower intensity pastoral farming.

Meanwhile most sites in the region comply with the Australian and New Zealand irrigation guidelines, but iron and manganese are naturally elevated in most aquifers.

The report says three-quarters of the sites HBRC monitors had no trend in phosphorus, however increases were found in the Mahia and Heretaunga, and Ruataniwha aquifer systems. This may be related to land-use activities over the aquifer systems.

HBRC is one of 14 regions that takes part in the national pesticide monitoring programme. No pesticides were found in groundwater in the 2010 and 2014 regional pesticide studies.