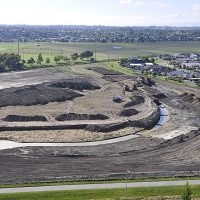 The new channel alignment for the Taipō Stream at Park Island is almost complete.

The contouring work will be finished in the coming weeks, before the new channel will be open to water later this month.

“There’s a positive interest from the neighbours who are looking forward to the outcome, which will be a great asset to the community,” said Antony Rewcastle, HBRC Open Space Development Officer.

Gair Contracting is doing the earthworks on this large project, which has also been designed to allow for the future expansion of HB Hockey with an additional two fields. The contractors have already spread soil over proposed new hockey area and brought it up to the correct level.

Mr Rewcastle has met with the hockey club and says they are excited about the potential expansion to their facilities.

The stream is being returned to close to its pre-earthquake alignment for this 700 metre length, when it was used by Māori to harvest seafood. The cultural history of the Park Island area extends back to one of the original inhabitants of Hawke’s Bay, Māhutapoanui, who lived on a pā on the island.

Planting of the new stream sides and wetland is planned for winter.