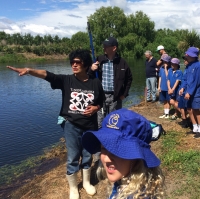 Clive School students have been learning about Operation Patiki today and about the ecology of the Old Ngaruroro/Clive River .

Hawke’s Bay Regional Council is assisting the project with a trial clearance of weed and sediment build-up in the river in the first two weeks of December. The aim is to improve the habitat of the river for patiki (bolack flounder).

Monitoring of the river bed both before and after the clearance is being done by HBRC freshwater science staff and will involve the community.

A ‘River Lab’ at Kohupātiki Marae has given the Clive students an opportunity to learn about pātiki and other creatures which live in the river, and the reason for the trial project. Operation Pātiki volunteers and HBRC scientists lead the class where students also provided their own observations and perspectives.

The students and principal Brian Eales, two Hawke’s Bay Regional Councillors, HBRC freshwater science staff and other visitors  were welcomed with a powhiri at Kohupātiki Marae before being taken to the river for the river lab.

“We’ve taken up the challenge to restore the awa/river to provide a better ecosystem for black flounder/pātiki and want to involve the wider community as people can learn a lot about the awa,” says Aki Paipper, of Operation Pātiki.

Following the weed and sediment trial, Operation Pātiki will host “The Big Bio Blitz” in mid-January at a date to be decided. This Citizen Science event will be a fun and fascinating way for people and families to help collect information to map the biodiversity of this part of the river.