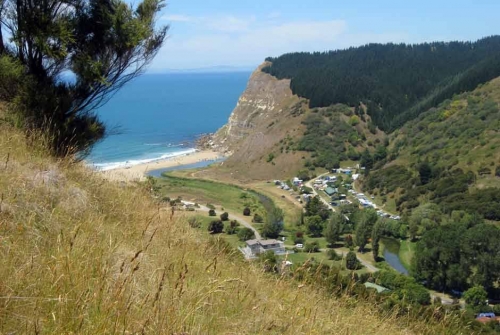 A two hectare section of beachfront land at Waipatiki Beach - and a local beauty spot popular with campers -  has been bought by three councils: Napier, Hastings and Hawke’s Bay Regional Council.

The councils each contributed $300,000 to the purchase of the Waipatiki Beach Holiday Park, with the ownership sitting with HBRC.

The camping business will be leased so that it continues as a much loved camping spot for locals. Seventy percent of the campsite bookings are from Hawke’s Bay people.

A clause means the land can never be sold into private hands.

Former camp-site owners Anne and Bill Perry have been praised for agreeing to the public purchase process, especially as it has taken 5 years to complete the transfer.  The Perry family owned the original farm since 1910 until most of it was sold in the 1970s, leaving 28 hectares. They had an idea for a camping park which was realised thirty years later.