Fish wash up at Lake Tūtira 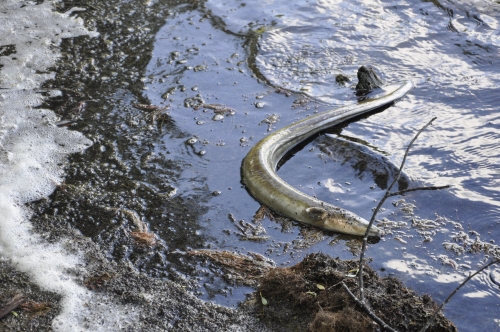 Hawke’s Bay Regional Council is investigating fish deaths in Lake Tūtira, with staff quickly on site to identify the cause.

Dr Andy Hicks, an Environmental Scientist at HBRC, responded immediately to this incident, which was similar to fish kills observed in January 2016.

“I went up yesterday and saw about 20 dead or dying eels. The dead eels are very obvious to any visitors who approach the shore with dead or dying fish observed around the boat ramp, camping grounds and northern end of the lake.  There was a slight stink in the air,” says Dr Hicks.

He warns that visitors to the lake should avoid handling any dead fish, and that the fish are definitely not safe to be eaten by any person or family pet.

HBRC staff recorded a pH level of up to 9.4 at the boat ramp – any reading above 9 is extreme. But unlike last year, the monitoring buoy in the lake has not recorded any periods of extremely high temperature or low dissolved oxygen around the times of this fish kill.

Staff also saw plenty of common bullies, which are a small native fish, alive and well in the shallows of Lake Tūtira and neighbouring Lake Waikopiro. No dead trout were observed but there were reports of at least two washing up on shore.

Tūtira is prone to algal blooms during hot summer months. Fish kills have not been uncommon, however the occurrence of two large fish kills in two consecutive years is unusual and of particular concern.

A similar event happened at Tūtira around New Year’s Day 2016, with a strong blue-green algal bloom some two weeks later, and a further widespread fish kill towards the end of January 2016. In both years, a background bloom of non-toxic algae, Ceratium, has been present. The pH level was also high around the time of the fish kills.

Samples of dead eels have been sent to Cawthron Research Institute for autopsy , and water samples have been sent for lab analysis to measure nutrient levels and how much algae is present. Due to the holiday period approaching, results from these samples may not be received until early 2017.

HBRC has been working for many years to improve the overall state of the lake and discussing issues with local people, lake users and the wider community. Restoring the lake is a long term project.

The Council is working closely with Maungaharuru-Tangitū Trust to improve lake water quality.  A two-year computer modelling project commissioned of University of Waikato’s lake restoration specialists by Council was recently completed and this offers some potential solutions.