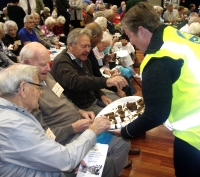 The annual afternoon tea for survivors of the 1931 Hawke’s Bay Earthquake is always a special occasion.

The afternoon tea is a community-supported event that has been held for 17 years to honour the people who as youngsters survived the Hawke’s Bay earthquake. Guests come from all over the region and further afield.

The afternoon tea will be held from 2 pm to 4 pm on Sunday, 12 February 2017 hosted by Napier Boys’ High School at their main Henderson Hall in Chambers St.

“The people who come to the afternoon tea as our guests always warmly tell us how much they enjoy and appreciate it. It gives them an opportunity to meet with old friends and neighbours and relive memories - for some the event was traumatic, for others it was an adventure of a lifetime,” says Napier City Deputy Mayor Faye White, who coordinates the event.

The afternoon tea is served by NBHS students and volunteers from the sponsor organisations. The organisers appreciate the generous support of local businesses and organisations which sponsor food and equipment.  Sounds of Hawke’s Bay Chorus will be the new entertainers this year.  The guest speaker will be confirmed shortly.