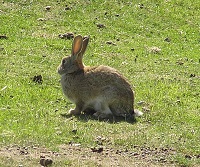 Hawke’s Bay Regional Council’s Environment and Services Committee today received a report on the proposed national release of the next strain of rabbit calicivirus (RHDV1 K5).

This strain of virus is currently going through an importation process in New Zealand with the possibility of release April - May 2017.  This variant is a Korean strain better adapted to overcome the protective effects of the existing immunity to calicivirus.

Rabbits are a declared pest in Hawke’s Bay Regional Pest Management Plan.  The control work is the responsibility of the landowner and HBRC meets 50% of the cost of rabbit control.

Following the illegal, unplanned release in 1998 of rabbit calicivirus disease (RHDV1), rabbits are now, in many cases, immune to this strain and populations are again flourishing in some areas.   The average immunity in Hawke’s Bay rabbits is 55-75%.

The New Zealand Rabbit Coordination Group (RCG) and Landcare Research are seeking approval from Ministry for Primary Industries and the Environment Protection Authority (EPA) to introduce the RHDV1 K5 into New Zealand.

A national controlled release is preferable to ensure that a higher quality, commercially prepared product is used.  The managed release also can be monitored and ensure maximise benefits to farmers and the environment.

If national approvals are given, HBRC proposes a coordinated release of the new virus into Hawke’s Bay in May 2017.   HBRC Biosecurity staff are preparing an operational plan. They are considering 30 sites where historically rabbit numbers are high and there can be an effective release.

In terms of pet rabbits, HBRC Biosecurity staff confirm that the existing vaccination to protect pet rabbits against calicivirus will work for this strain.  They are advising vets, pet shops and rabbit breeders of the need to maintain vaccinations.