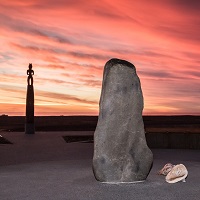 At sunrise on Monday 20 March, the first stage of the transformed Waitangi Regional Park was unveiled to an invited group of iwi, project funders, supporters and construction crews.

The greatest feature in the park is Ātea a Rangi, the fifty metre wide star compass, which sits on a constructed mound overlooking the Pacific.  The celestial compass features the first 4 of 32 pou or carved posts which will mark the compass points that Maori used to navigation.

The transformation of this area of the regional park has been a collaboration between Te Matau a Maui Voyaging Trust and Hawke’s Bay Regional Council to design and construct the compass. The compass celebrates this important historical area where both Māori and Europeans first arrived in Hawke’s Bay.

“We have worked together and created something marvellous that celebrates our cultural and settler history,” said HBRC Chairman, Rex Graham.

Story boards have been installed around the compass to explain the history of the area.

“We want to educate people and let them know of the historical importance of this part of the land and about navigation,” said Phillip Smith, Chairman Te Matau a Maui Voyaging Trust.

The regional council and the Trust had been disappointed by persistent dumping of rubbish and vehicles tearing up land in this historic area.  They hope that the enhancements of the compass, story boards, paved car park, and restricted access to the coast will improve people’s respect for the location.  Security measures are in place.

The ceremony was specifically held to mark Equinox and the first dawn of autumn when we see the sun moving north into winter.

An extended wetland area has been dug to provide more habitat for birds and breeding areas for whitebait species. Some of the earthworks were to enable the NZ Transport Agency to put in a new bike bridge and for council to construct the connecting cycle paths and compass platform.  Public planting days will be held this winter to further enhance the new wetland.

Drainage has been improved to stop the flooding of the William Colenso Memorial area, the location where the first European missionary and his wife Elizabeth had their cottage.