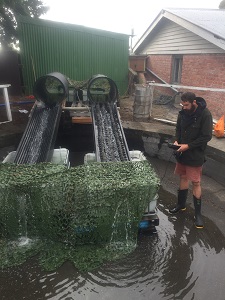 An innovative floating fish ramp is proving an inexpensive and robust solution to overcoming barriers preventing fish from migrating upstream around the country.

More than half of New Zealand’s native freshwater species migrate between the sea and freshwater, but man-made barriers, such as perched culverts can disrupt these migrations – preventing fish accessing upstream habitiat.

As part of his Masters thesis, Dan Fake from the Hawke’s Bay Regional Council has been undertaking a series of lab trials with an array of freshwater species to come up with a design that best helps the fish ascend the ramps.
Daniel Fake says the fish ramps help inanga, eels, bullies and other native species to swim past structures that collectively deny fish access to kilometres of freshwater habitat.

The project is being supported by the New Zealand Fish Passage Advisory Panel, which aims to improve fish passage in waterways around the country.

Daniel Fake says barriers can often cost thousands of dollars to fix, but these new fish ramps at under $500 each are a relatively cheap tool to improve fish passage.

Kelly Hughes from ATS Environmental in the Bay of Plenty is the distributor for the ramps – and units are currently being purchased by other Regional Councils around New Zealand.