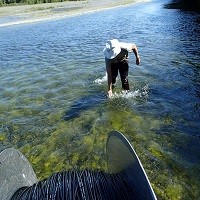 Fibre-optic cable was used in the Ngaruroro River last week to find out more about the connections between groundwater and surface water.

Scientists from GNS Science (www.gns.cri.nz/) were working with Hawke’s Bay Regional Council on a project in the lower Ngaruroro to investigate these connections, using water temperature and river flow measurements.

GNS scientists placed 5 kilometres of fibre-optic cable along the bed of the Ngaruroro River to measure water temperature between Hill Road (about 1km downstream of Fernhill) and Carrick Road.

At the same time, Hawke’s Bay Regional Council hydrology staff gauged flows at Fernhill and at Hill, Twyford and Carrick Roads. Preliminary flow measurements from the survey suggest that approximately 300 litres/second is progressively lost to groundwater between the upper and lower gauging sites.

For GNS the river work is providing information for both GNS Science’s ‘SMART Aquifer Characterisation Programme’ (which aims to develop a suite of innovative methods for characterisation of New Zealand’s groundwater systems), and the NIWA-led Waterscape Programme.

HBRC will use the data to assist with management of water resources.

“GNS Science hope to determine if there are gaining or losing reaches between the gauging sites that haven’t been identified before. The data collected will add to our knowledge and understanding of groundwater and surface water interaction between the Ngaruroro River and the Heretaunga aquifer,” said HBRC Scientist - Hydrology Rob Waldron.

The work was completed last week and the data will be processed and analysed over the next few months.