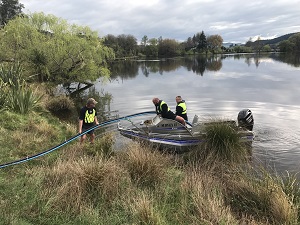 An air curtain is being trialled in Waikōpiro Lake at Tūtira this summer as work continues towards improving the water quality in the area.

The trial is being undertaken as part of Te Waiū o Tūtira (the milk of Tūtira) project, which is a partnership between Maungaharuru-Tangitū Trust and Hawke’s Bay Regional Council aimed at improving the water quality and habitats in Waikōpiro and Tūtira Lakes.

The area is one of six identified in the HBRC’s annual plan as environment hot spots needing attention.

A lack of oxygen and the lake water heating up in hotter months has been a major factor causing algal blooms and the death of fish in summer, which have left the lakes largely out of bounds to those who enjoy camping, swimming and boating in the area. Blooms can also turn toxic and pose risk to human and dog health.

Pressurised air will be pumped through a 50-metre pipe tethered close to the bottom of lake and across the deepest part, creating an air curtain. The air curtain increases oxygen levels at all depths throughout the lake by creating a circulation current, much like bubblers in a fish aquarium.

The system is being piloted in the smaller Waikōpiro, and if successful a larger air curtain will be installed in Tūtira Lake.

“It's a great second step in building on our initial project to improve the mauri of the lakes and partnerships are important to our success,” says Shayne Walker from Maungaharuru-Tangitū Trust.

“The lakes are the centrepiece of a spectacular area, with so many outdoor recreation and adventure opportunities so having the water clean and clear again would be a boost to the area,” says HBRC Chairman Rex Graham.
The air curtain has been constructed on-site by HBRC’s Works Group staff, mostly out of parts found in any hardware store. Unison is fast tracking the power supply installation so the aerator can be running before the lake water warms up. Scada Electric Limited is undertaking the electrical work.

An attempt to achieve lake mixing was made the 1970s, using older technology and structures, but was unsuccessful. Advice from Dr Max Gibbs, a specialist in lake mitigation technologies from NIWA, has explained why the previous attempt failed and confirmed the current approach should be successful. The same air curtain approach has brought algal blooms under control at several WaterCare reservoirs around Auckland, as well as in Lake Manuwai near Kerikeri. Bill Hunter, who installed the successful Lake Manuwai system, has been contracted to guide the installation at Waikopiro.

As HBRC is installing a new water monitoring buoy in Tūtira Lake, the old one will be relocated into Waikōpiro Lake to monitor changes in water quality.

“We will be closely monitoring Waikōpiro over summer as the air curtain does its job, and we’ll use the information to make decisions about constructing a larger system in Tūtira,” says HBRC water quality scientist, Dr Andy Hicks.

Over decades, many efforts have been made by landowners, HBRC and earlier organisations to reduce the amount of sediment in the lakes by planting the surrounding hillsides and creating more wetlands. However, the lake floors contain a legacy load of sediment with nutrients that continues to feed algal blooms. There is no way to get rid of it, and options to seal the layer have other potentially damaging environmental outcomes. Oxygenating the water is the safest option.

Te Waiū o Tūtira, the milk of Tūtira is a partnership between Hawke’s Bay Regional Council and Maungaharuru-Tangitū Trust. The project aims to restore the mauri of Lakes Tūtira and Waikōpiro, making a place that families can happily return to, and where children can swim.