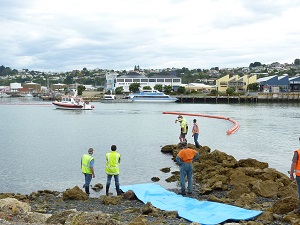 Under the Maritime Transport Act, HBRC is required to respond to oil spills that occur within the coastal marine area in Hawke’s Bay. It is required to maintain a trained team of oil spill responders and run exercises every year.

On Thursday it will be running a desktop exercise aimed at the management section of the response team.

HBRC Regional On-Scene Commander Ian Lilburn says the scenario is an oil discharge from a ship off the Southern Hawkes Bay coast with the possibility of heavy oil (like the oil from the Rena) coming ashore.

“This area has been selected as the beach and estuary area of Porangahau is regarded as an important ecological and cultural site that would require a high degree of planning to respond to oil coming ashore,” says Mr Lilburn.

Early next year further training will involve exercising with the oil spill response equipment to maintain skills and familiarity with the equipment.