Challenges facing our most endangered gull 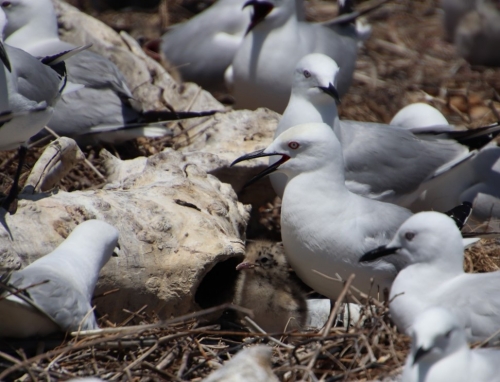 Playing out at the mouth of the Tukituki River is a dramatic story involving natural born killers, brutal storms, protective parents, vulnerable chicks and dedicated volunteers.

The black-billed gull tarāpuka is a critically endangered bird, getting attention from an ecological enhancement programme led by Hawke’s Bay Regional Council’s river engineering team, in partnership with the Department of Conservation.

A sizable breeding colony of 300+ nests established itself at the northern side of the Tukituki River mouth late in 2017. This is one of the largest colonies ever found in the North Island – a boon for the survival of the tarāpuka whose stronghold populations have declined as much as 80%.

The colony most recently defended itself against intense storm swells, king tides and the destructive intentions of a feral cat.

Fortunately, the odds are balanced in their favour thanks to local volunteer bird enthusiast Bernie Kelly, from Clive.

“Most people aren’t aware how endangered the black-billed gull is. We’re lucky to have them breeding here, and to see how well they’ve done after last week’s hurricane strength storm,” says Mr Kelly.

“Keeping an eye on the colony, I see how the adults raise their chicks, how fast they grow and how quickly the colony adapts to changing conditions. In last week’s storm, chicks were pushed inland and luckily caught by marshy areas.  Adults were looking after them there until the weather improved. They then herded them back to a stony outcrop where there were far fewer losses than I had expected.”

Volunteer support from Bernie alongside council and DOC staff has overseen the extermination of a feral cat plaguing the colony, while looking out for other predators like weasels, ferrets, stoats and hedgehogs.

“It’s incredible how much damage just one feral cat can do to a bird population,” adds Mr Kelly.

While the birds are doing their best, mostly invisible to the public, the colony’s success comes down to living at the water’s edge, a shingle beach, sedges and grasses. Limited public access and no vehicles are also important success factors for parent-gulls to raise chicks.

“Alongside these gulls are a range of other threatened species including white-fronted terns tara, pied stilts poaka, oystercatcherstōrea, NZ dotterels tuturiwhatu and banded dotterels pohowera.  I suspect they all chose this spot because it’s basically a great habitat and they all benefit from the predator control.  Plus a local champion like Bernie who checks on traps and the colony just about every day makes a huge difference.”

Disturbing protected birds such as the tarāpuka and destroying nests is an offence under the Wildlife Act 1953. It can result in imprisonment and/or a fine of up to $100,000.