Consulting the community about an on-demand public transport service 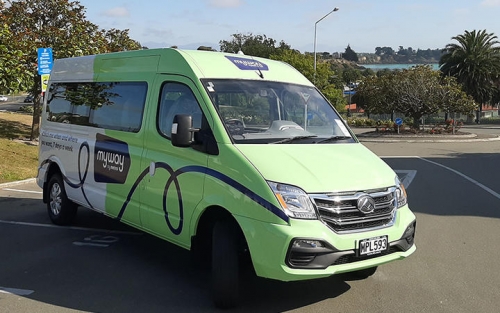 Hawke’s Bay Regional Council is consulting the community on a new form of public transport that replaces fixed routes with an on-demand service.

Regional Councillor and Chair of the Regional Transport Committee Martin Williams is excited about the proposed trial in Hastings which uses innovation and technology to lower the region’s transport emissions and will give more people access to public transport.

“This project will not only have real benefits for reduced carbon emissions across the region, but has the potential to make public transport more useful and accessible for everyone, at the click of a button or more precisely – ‘the tap of an app’,” says Mr Williams.

“Better still, it will benefit those people in our communities who most struggle to afford a car or petrol, or find it difficult to walk to the nearest bus stop.”

Public transport is a great way to reduce our transport emissions, but we need a much smarter more efficient, demand-based solution for this to be a viable solution for Hawke’s Bay. In my view, on-demand provides exactly that, he says.

“The Regional Council is very keen to hear from people about how an on-demand service might affect or benefit them, so responses can be built into the trial,” says Mr Williams.

Passengers would be able to order rides through an app or over the phone using either a mobile or their landline, and if using a smart phone, can track their ride on the app.

It is a ‘corner to corner’ service so passengers may have to walk around 200m to be picked up.

The fare schedule still has to be confirmed but trips may be as low as $2. Waiting time for any trip should be no more than about 15 minutes, but trips can be booked well in advance.

“At the moment, there are three bus routes within Hastings, 16A, 16B and 17 with a total average number of passengers in any one day of 110 which means near empty buses in some cases,” says Ms Brunton.

Buses on other routes within the network, and between Napier and Hastings would continue their normal services.

Ms Brunton says this innovative on-demand system has been successfully rolled out in many cities across the world including in Timaru last year, where great feedback has been received.

Transport accounts for nearly half of New Zealand’s energy related greenhouse gas emissions, but many Kiwis don’t know that their petrol or diesel car use is likely to be their single biggest contributor to their carbon footprint. Car trips under two kilometres make up nearly one third of trips, with an average of 12 such trips per household per week.

If the trial is successful, on-demand transport would then be trialled in Napier in 2023.

Head to hbrc.govt.nz to have your say on the proposal.