Regional Council says illegal burning will not be tolerated 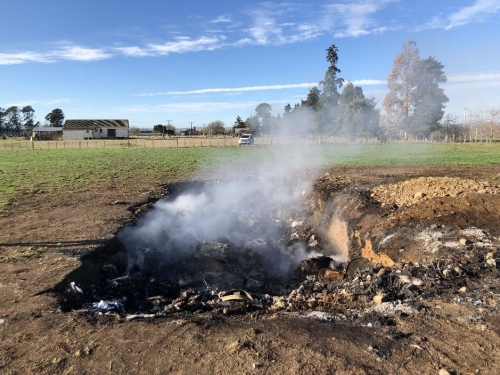 The Hawke’s Bay Regional Council says fines totalling $24,700 handed out to two companies it prosecuted for illegal burning serve as a timely reminder that it is unacceptable to breach burning rules.

In the first case, Awakeri Drainage Limited pleaded guilty to burning prohibited items, including asbestos, and was fined $13,500.

The Regional Council’s Pollution Response team attended the fire in Farndon Road in Clive in June last year, where a large orchard redevelopment was underway. Debris from an old woodshed was being burned.

The fire contained a number of prohibited items including broken asbestos cladding, the remains of an electrical switch board with coated wire attached to an asbestos backing board, plastic, treated timber, metal conduit pipes, metal flashings and garden hose.

The Regional Council says burning these items is associated with nuisance dense smoke and also emissions of hazardous air pollutants known to cause cancer or serious health effects that persist in the environment and accumulate in body tissue when ingested.

Judge Dickey found that this fire would have contributed to the adverse cumulative effects on air quality in the area.

The Regional Council’s Pollution Response team was called to the property in Plantation Road in June last year.

As in the first case, burning these items is associated with nuisance dense smoke and emissions of hazardous air pollutants known to cause cancer or serious health effects. These include polycyclic aromatic hydrocarbons (PAHs) and dioxins.

Judge Dickey found that the company was highly careless with regard to its oversight of the lighting of this fire and the types of materials that were placed on it, and in its lack of monitoring of the contents of the pit to ensure that its waste management policies and procedures were being followed, and fined it $11,200.

Regional Council Group Manager Policy and Regulation, Katrina Brunton, says these fines are a timely reminder to the rural community that this way of waste disposal is unacceptable.

Outdoor fires are regulated by the Hawke’s Bay Regional Resource Management Plan and it is prohibited to burn certain items at any time of year, she says.

The Regional Council is also running an extensive winter burning campaign to educate the community.

“The rules around burning are clear for rural and urban areas to protect the health of our communities. The Regional Council’s website contains information in relation to burning including what you can and cannot burn and when. Visit hbrc.govt.nz and search #burning,” says Mrs Brunton.