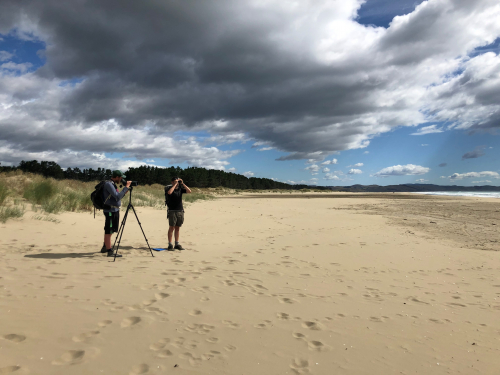 The Regional Council has released its first survey of Hawke’s Bay’s coastline which shows a healthy coastal bird population along 321 kilometres.

The surveying team went by foot or boat from the bottom of Hawke’s Bay’s coast at Whangaehu up to Mahanga, and recorded the presence and number of all birds and marine mammals they saw for each 1km section along the coast.

Regional Council Scientist Marine and Coasts Becky Shanahan says the survey is a great benchmark for the Regional Council and gives a clear picture of the state of Hawke’s Bay’s coastal birds.

“This is the first time we’ve surveyed our coast from the top to the bottom, and we’re really excited to see the results. Over 32,000 birds were counted over the 2021-21 summer – that’s massive!” says Ms Shanahan.

The Regional Council commissioned the survey of native birds to create a regional-scale baseline measure of the diversity, distribution and abundance of birds along the coast.

“The Hawke’s Bay coastline is an important breeding and foraging ground for many native birds,” says Nikki.

“We counted 79 birds species, with 72% being natives. Sadly, 35% of these native birds are ranked as either nationally threatened or at risk due to habitat loss and degradation, predation, impacts from other human activities, and climate change,” says Mr McArthur.

The team surveyed 65 estuaries and lagoons showing native species thrived the most in these environments, as well as on inshore islands and along sections of coastline with mixed rocky shore and sandy beach habitats.

“Some of the birds seen along the coast included Arctic-breeding and endemic shorebird species, such as bar-tailed godwit (kuaka), ruddy turnstone, banded dotterel (pohowera) and ngutu pare wrybill (ngutu pare).”

“This count showed a massive increase for in the numbers of banded dotterel (tuturuwhatu), up from 86 in 2011 to 222 this year, which is a direct result of conservation interventions through pest control and managing human disturbance. It’s rare for any part of the country to see such a strong recovery by a threatened species, and it’s so cool to see it here in Hawke’s Bay. It’s a credit to the groups that care for coastal habitats, including Department of Conservation, the Regional Council, Cape to City, and community groups,” adds Nikki.

Workshops will be held on: