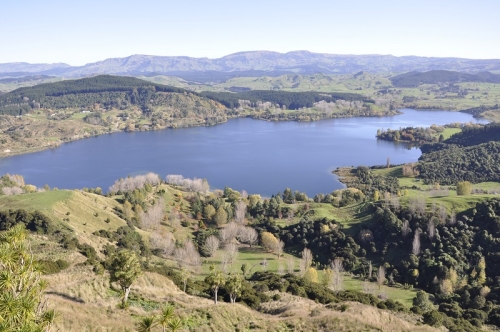 The cause of the eel and fish deaths in Lake Tūtira are still being investigated by Hawke’s Bay Regional Council environmental scientists.

Meanwhile Dr Andy Hicks, the HBRC environmental scientist who is leading the investigation, is concerned about the risk of a more extreme cyanobacteria bloom in the lake in the next couple of weeks.

“There are permanent signs at the lake warning about algal blooms, but people will need to be especially cautious around the lake over the Christmas period,” he said.

HBRC science staff have taken more water samples at the lake this week, from surface, mid and deep water.

“We’ve looked at data from the buoy and taken samples, but at this stage we cannot determine a clear cause of the deaths.  Earlier this year it may have been related to high water temperatures and low oxygen, but that was not the case this time. During both periods when fish kills occurred, however, the pH has been extremely high,” says Dr Hicks.

Samples from the investigation will test a hypothesis that it may have been an ammonia release from organic material accumulated on the lake floor.  Ammonia is released under extremely high pH, and it is toxic to fish. If ammonia is seeping out of the sediments, the toxic effect will be greatest along the lake floor, which is where eels will be hiding out during the day.

This may explain why trout, which are more of a mid-water fish, and small fish that occur in the lake margins, were not affected. The ammonia would have diluted and been less toxic by the time it had diffused from the lake floor into the broader water column. However, an ammonia release may have been a short lived process, and HBRC scientists may have missed the opportunity to get confirming samples.

Maungaharuru Tangitū Trust, Fish and Game and the Department of Conservation are assisting with the investigation.

“We are extremely disappointed to see the lake in such a poor state,” says Te Kaha Hawaikirangi from Maungahahuru Tangitū Trust. “It stresses the importance of the restoration work we will be doing as part of our Tūtira Mai Ngā Iwi project, to try to improve the mauri (life force) of our taonga.”

Fish and Game will also be keeping a close eye on things over the summer period.

“We released 4500 yearling rainbow trout and 500 brown trout into the lake during October and November,” says Mark Venman, Hawke’s Bay Fish and Game Field Officer. “We would appreciate reports if anyone comes across dead trout in Tūtira over the coming weeks.”