Spare a thought for the fish in this hot weather 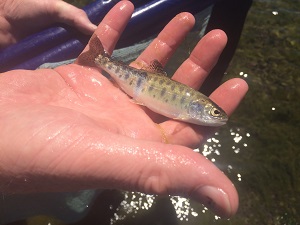 Hawke’s Bay people are being urged to spare a thought for the fish as the temperature in the region’s waterways heats up.

Tests late last week revealed water temperatures in the Tukituki River hit 29 degrees and many other rivers and streams are also extremely warm.

Hawke’s Bay Regional Council Senior Hydrology Scientist Thomas Wilding says most fish prefer to live in water temperatures below 20 degrees so the hot weather is having quite an effect on them.

“This is a really stressful time for fish because the hotter it is the more oxygen they need. At 29 degrees many fish are simply running out of puff and it doesn’t take much to tip them over the edge,” says Dr Wilding.

He says when people are washing the car or the house they should be thinking about where that water is going.

“For most people living on the Heretaunga Plains the stormwater ends up in a stream where the temperature gauge will be in the red this week. For example a tributary of the Karamu Stream reached 27 degrees last Thursday.”

“Wear a brown lawn with Hawke’s Bay pride! Most people in Hawke’s Bay appreciate that water is a precious resource, so with your help we can make it through the week without fish kills.”

Meanwhile, Hawke’s Bay Fish & Game Manager Mark Venman says anglers need to look after any trout that they catch during the warmer weather, especially if they are intending to release them.
“If anglers are releasing a trout, they should keep it in the water and avoid touching it if possible. Net the hooked trout quickly to avoid the fish becoming exhausted and never drag a trout up onto hot river rocks or sand. Release the trout where there is some cooler flowing water, and with wet hands gently cradle the trout until it swims off,” says Mr Venman.

He says Anglers might want to fish early in the day or in the evening when temperatures are slightly cooler.

“Trout can stop feeding when water temperatures get above 20 degrees and the fishing can get tough.”

He says spring-fed streams tend to stay cooler and fish often seek refuge there as well as areas where cold water rises up from below in the main rivers.