Napier Port is owned by the Regional Council on behalf of ratepayers. It needs $320 - $350 million over 10 years for it to support the growing Hawke’s Bay economy.

A consultation document was uploaded on the Regional Council’s website today and consultation will formally start on 15 October and run for a month. The document, which will be delivered to every letterbox in Hawke’s Bay in the middle of October, sets out four options and states a preference for a sharemarket listing of up to 49% of the Port.

Regional Council Chair, Rex Graham, says the Council has been considering Port funding options for the best part of two years and was open-minded on the potential options. He says doing nothing would negatively impact the Hawke’s Bay economy and cost jobs. At the other end of the spectrum, funding the Port’s growth via rates would see average rates rise by 53% over the next year.

“Napier Port is at a tipping point. It is constrained and turning away larger ship visits every year. Next year the Port expects to turn away seven cruise ship visits due to a lack of space and at a cost to the local economy of $3.5 million.

“The Port underpins Hawke’s Bay’s economy, associated with half of the region’s economic production and 27,000 local jobs. We must allow it to invest and to grow,” says Rex.

“The Port experienced a 25% increase in cargo volumes over the last two years, bringing forward its investment requirements. A new wharf costing $142 million needs to be built by the end of 2022 with construction starting next year.

"The Port can’t borrow more without taking debt to imprudent levels. Council borrowing to fund the Port would see significant rates rises across Hawke’s Bay, take debt to high levels and reduce Council’s financial flexibility to do its job.”

Rex Graham says he believes floating a 45% stake of the Port on the New Zealand Stock Exchange was the best option for the people and economy of Hawke’s Bay, though Council had a very open mind to other options.

“This option would clear the Port’s $86 million of debt, from which point it will be able to self-fund its growth. This option funds the Port’s growth, allows locals to maintain ownership and control, provides an opportunity to invest directly in our Port and does not require more money from ratepayers.

“Additionally, the Port currently makes up three quarters of the Regional Council’s revenue-generating assets. This is poor risk management. A minority share float allows Council to diversify investments while benefiting from continuing to own a strong commercial asset.”


Rex Graham said the proposal was mainstream. It was the same approach as that used at the Port of Tauranga, under which the Port and its shareholders have thrived.

“There’s a lot to consider. We’re consulting the community for a full month on these four options and we urge people to have a say.

“We will consult thoroughly: every household will receive a proposal document in the post from the middle of October, including detail on how to participate in the conversation. There will be a great deal of background information online, we will hold public information sessions and every local will have an opportunity to be heard on this decision.”

Rex Graham says he expects a call from some quarters for a referendum but says this kind of consultation is the right way for decisions of this significance and complexity to be made.

“We’re dealing with a challenge that local authorities around the world are now dealing with - how to fund major investment in strategic assets while retaining ownership. We don’t have time to wait, as the Port needs to get on with investing in our region’s future.

“A 45% market listing will serve our region and our Port well, but we’re open to other ways. Now it’s time for Hawke’s Bay locals to engage in this conversation and have their say.”

Chair of Napier Port, Alasdair MacLeod, said the Board supports the Regional Council’s decision to consult on the ownership structure of Napier Port.

“Council’s preferred option of making an Initial Public Offering of a minority stake in the Port has our full support. Ensuring Napier Port’s continued development is crucial to unlocking the region’s economic potential and Napier Port will support Council’s ultimate decision on how that can be funded.

“We’d like to commend Council’s commitment to making this important decision for the region of Hawke’s Bay.”

Our Port – Have your Say : Consultation Document

Our Port – Have your Say: Consultation site - with Supporting Information, including videos 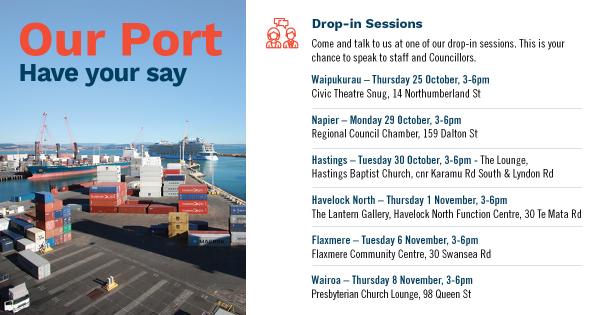