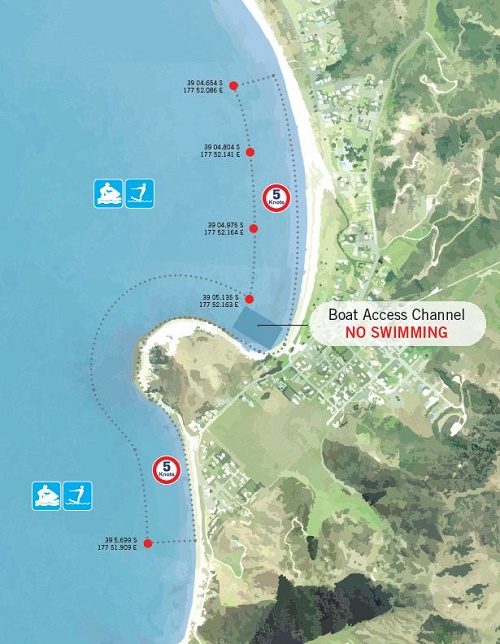 Five new navigation marker posts have been installed at Mahia Beach by the regional Harbourmaster.

“The posts replace the old marker buoys which tended to drift off position in heavy seas, and these posts are firmly anchored to the seabed,” says Harbourmaster Captain Martin Moore.

The posts were drilled into the seabed by Bay Underwater Ltd, a commercial dive company from Mt Maunganui, who used a high speed hydro jet.

The posts are 200 metres off the shore.  The purpose is to keep swimmers safer by marking a zone in which boats have to slow down to 5 knots.

One post was unable to be installed at Taylors Bay because the hydro jet hit rock at 2 metres down and the post couldn’t be stabilised.  The Harbourmaster will look at alternatives early in 2019.

“The installation couldn’t have happened without local help pitching in, namely Joe Hedley, Alan Dickson and the other local guys who provided the tractor and driver to launch the work boat. Once again, Mahia locals were pitching in and helping out, and making sure people can enjoy the water in safety,” says Harbourmaster Moore.

The piles were hydro-jetted in to the seabed using a high pressure water hose attached by a quick release coupling to the pile. This causes minimal disruption to the seabed, which will back to its original state by now.

“Boaties will quickly work out that they will come off second best if they bump into these – these posts aren’t going anywhere.  And it will give swimmers in the zone some security at the beaches, although they aren’t permitted to swim in the boat access channel.”

He will also available to talk with navigation safety matters at the Water Safe Wairoa Day on Waitangi Day, where he’ll be with the Safer Boating education team.