Tūtira project is bubbling along 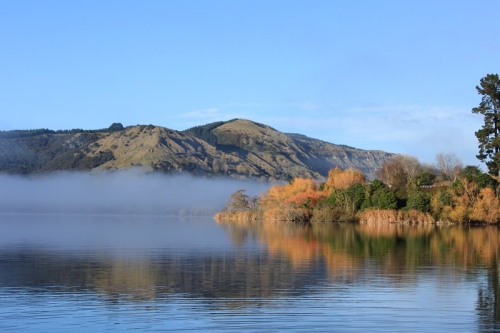 The trial of an air curtain in Lake Waikōpiro at Tūtira continues, but Hawke’s Bay Regional Council scientists say the results are inconclusive about the potential effects of upscaling this solution into Lake Tūtira to help fix the lake’s long-term water quality.

A 50 metre long air curtain was installed into Lake Tūtira’s smaller neighbour Lake Waikōpiro in 2017. It has been monitored by Regional Council scientists as they test for effectiveness, any undesirable consequences and the best way to operate the air curtain.

The air curtain is just one technical piece of a significant, long-term project called Te Waiū o Tūtira – the milk of Tūtira, a partnership between Maungaharuru-Tangitū Trust, landowners and the local community, working with the Regional Council. The hapū’s phrase ‘ko te waiū o ō tātau tīpuna – the milk of our ancestors’ refers to an abundance of kai and spiritual sustenance derived from Lake Tūtira.

After two varying seasons of results, initial analysis is that the air curtain does mix the lake water, which was its purpose. But the question remains as to whether this approach - if scaled up and installed in Lake Tūtira - would help to fix the lake. For that reason, it’s still to be decided by the project’s governance group whether to invest up to $200,000 to deploy a new and bigger air curtain into Lake Tūtira.

At 1.2km at its widest point, Lake Tūtira is a large lake, but the streams that sustain its life force flow in and out too close to each other, over time sediment in-flows have clogged the lake and the nutrient levels remain high. Fixing these basic but complex elements are all parts of this project, including the land use where run-off has a direct effect on the lake’s health and function.

Te Waiū o Tūtira’s work plan includes the growing possibility of creating a new southern outlet to improve water mixing and access for eels, a logging and planting plan that protects the lake from potential forest slash and sediment, working with local landowners to plant the right trees and improve farm plans and ways to reconnect Papakiri Stream (Sandy Creek) to the lake at low flows. The long-term solutions aim to lessen the amount of nutrient and sediment entering the lake.

Lake Tūtira sits in a dynamic natural environment, heated aggressively by the sun in summer, situated in a natural bowl with small flows in and out of the lake, little natural mixing of the water and a high loading of nutrients, which often leads to algae blooms. In spite of that, Lakes Tūtira and Waikōpiro have long been popular for recreation and fishing and Tūtira Regional Park on the shore of the lake is a well-known camping destination.

In 2018 Te Waiū o Tūtira - the milk of Tūtira received $1.5 million from the Freshwater Improvement Fund, administered by the Ministry for the Environment. Tūtira has also been the focus of a ‘hotspot’ focus led by Hawke’s Bay Regional Council, with a total budget in excess of $3 million. The Tūtira Mai Ngā Iwi project was a precursor to this work, also funded by MFE.

More information on this project is at hbrc.govt.nz, search: #Tutirahotspot.