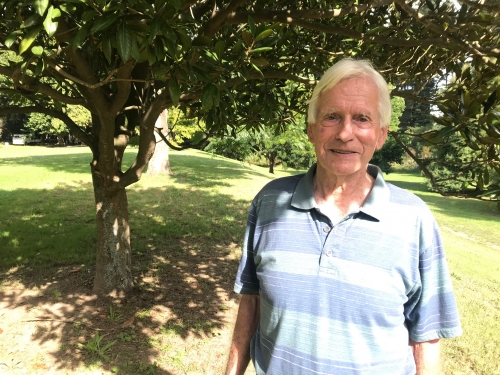 Mr Rood has recently retired from this role, and former Regional Council park managers Garth Eyles and Steve Cave joined with current staff and Chairman Rex Graham at the park to wish him well.

“I have to thank Theo on behalf of everybody in Hawke’s Bay who loves this park.  He has done a stunning job of keeping the park in good shape and he’s part of the legacy of volunteers who have shaped Pākōwhai Park into the popular place it is today,” says Chairman Rex Graham.

Garth Eyles, former land management manager, was in charge of the Parks twenty years ago when he took on Mr Rood to tidy up the park for an event.  He then hired him to work one day a week to keep the park up to scratch.

“Theo was a former nurseryman so knows plants, and was ideal for the job, especially when planning new planting.  The park’s condition is due to his management under the oversight of a long-term organisation like the regional council which looks to the future,” said Mr Eyles.

Mr Rood has installed the wetland and plantations within the park, as well as taking general care.

“I will miss the park, especially the people who love walking their dogs here, and their feedback is always positive which has made the job good,” Mr Rood said.

He also helped with the enhancement of Pekapeka Regional Park south of Hastings.

“We planted about 16,000 trees and shrubs at Pekapeka. I can’t forget carting trees along the railway line to get to what I call Totara Hill.”  That planting at Pekapeka is now well established across the boardwalk.

Mr Rood was acknowledged for his hard work tackling blackberry, fern and other weeds to break in new park areas for the public to enjoy - he says planting is the easy bit.

Pākōwhai Regional Park is currently managed by HBRC staff and contractors, as well as a volunteer (Ian Alexander and his dog Pickles).

On Saturday 6 April, a special event for dogs and their owners - Paws at Pākōwhai - will be held again from 10am-12 noon at the Regional Park.  Free community event