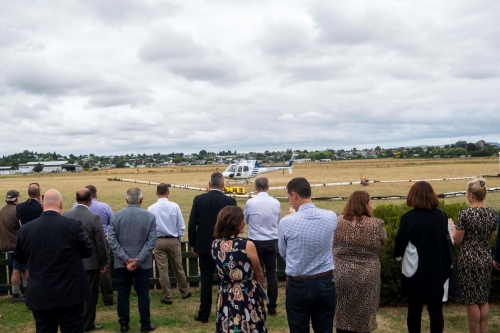 The Hawke’s Bay Regional Council’s ambitious project to get the clearest picture yet of the region’s freshwater supply has taken flight.

A helicopter towing the latest airborne electromagnetic survey technology called SkyTEM is flying over the aquifers for the next six weeks and scan them down to 300 metres, further than has ever been seen before.

The 3D aquifer mapping project is a collaboration with the Regional Council, the Provincial Growth Fund (PGF) and GNS Science, using Danish SkyTEM technology that has been used extensively overseas.

“Water security is critical to the social, economic and environmental future of the region. Securing and managing our water starts with better understanding of what we have, how we use it and what future demand looks like,” he says.

Mr Graham says having 3D digital maps of all of the region’s major aquifers from the SkyTEM technology will help to understand how big they are, how much water they hold, how the water flows in, out and through them and where they may be vulnerable to surface contamination.

“Nearly every ratepayer in the region relies on groundwater for their drinking water supplies, so to manage that effectively, we need to know what’s going on in the ground.

freshwater supply. The information we will get from the survey has significant value for the entire Hawke’s Bay community in better understanding our water resource. The results will be a big asset and are to be freely shared and available to tangata whenua, other councils and community groups,” he says.

“We’re brought cutting edge frontier science here. It will help us better understand one of our most critical and precious resources to better inform our decision making to allow smarter more effective use of water. At the same time, we are protecting what is taonga for the region. It’s really exciting and a really progressive step,” he says.

Mr Maxwell says the 3D aquifer mapping project unlocks a rich understanding of our groundwater resources and will give us knowledge that we’ve never had, which is critical to help form our future decision making.

Hawke’s Bay residents may see the low-flying helicopter towing a large hoop until the beginning of March over the Heretaunga Plains and off-shore, Ruataniwha Plains, Otane and Poukawa Basins and the Ngaruroro River Valley areas.

The data gathered from the survey will be used to build a detailed 3D digital picture of the aquifers horizontally and to depths never seen before. The new information will improve understanding and management of groundwater resources.

The 3D aquifer mapping project is one of four freshwater projects announced during the PGF allocations to Hawke’s Bay in June last year. The others are a whole-of-region freshwater assessment, and pre-feasibility investigations on a Heretaunga flow maintenance/water storage initiative and a Tukituki water security initiative.

For more information check out our 3D water page.