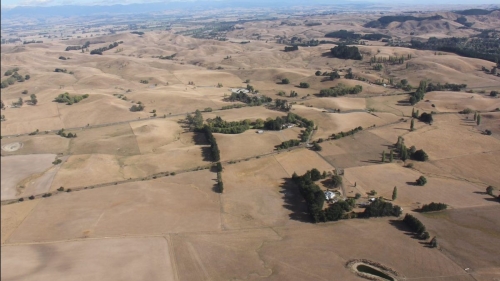 The Hawke’s Bay Drought Committee is recommending to the Government that the region declare a medium-scale event under the Government’s Primary Sector Recovery Policy, to trigger welfare support and resources to adversely-affected farmers and landowners.

A meeting of Hawke’s Bay Regional Council, Federated Farmers, Civil Defence, the Rural Support Trust and other agencies has recommended that Hawke’s Bay declare a drought status, in response to the persistent dry conditions notably being experienced in Central Hawke’s Bay and Hastings Districts.

During February, most areas of Hawke’s Bay were very dry and received less than 10 per cent of usual rainfall after three months of below normal rainfall. Temperatures in February 2020 were 3 degrees (Celsius) hotter than other previously recorded average February temperatures.

Drought Committee Chair and Regional Councillor Will Foley opened the meeting with a summary of the conditions.

“It’s getting dire south of Hastings and in Central Hawke’s Bay and has been heading in that direction for some time. We also have issues other than climate playing out at the moment, such as beef and deer Tuberculosis movement controls and Coronavirus,” says Mr Foley.

“We want farmers to know that they have our support and willingness to help. I also want to note that if people have ready access to water, they should be conscious and sensitive to the fact that other people do not,” adds Mr Foley.

“We need to see this level of support from the Government now. I’m seeing people where normal access to water is just not there. They don’t have access to water from a tap. They can’t get water to their stock and there’s a level of need that is not being met,” says Mayor Walker.

“We want to support farmers that have a need and help them to make decisions into next season and beyond,” adds Mayor Walker.

South of Hastings, farmers have needed to move stock off land and dip into winter feed.

Central Hawke’s Bay is adversely affected. The Ruataniwha Plains and many rivers and streams in the south of the region are under long-term water take bans from below the Ruahine Ranges and extending out to southern coastal properties.

Consented water use across the region has been closely monitored by the Regional Council and has shown very high levels of compliance from the rural community.