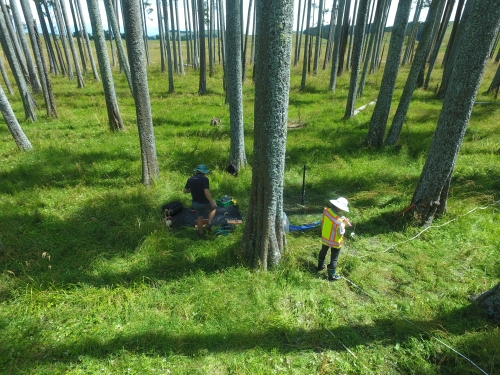 A community project in Omakere is bringing back the once-thriving giant, kahikatea.

To celebrate International Biodiversity Day on 22 May, the Regional Council is highlighting the good mahi going on round the region during May. This Central Hawke’s Bay project shows the impact a focussed community can have.

“Biodiversity, nature, ecosystems - these terms describe a web of life that works and functions in harmony.  In NZ, although we have exotic things that disrupt our unique web, we still have strong pockets of biodiversity to sustain our well-being. Think rivers, bush, bird songs, and clean air.  All these things, which are what biodiversity produce for us, made us feel better and lifted our mood during the lockdown,” says Keiko.

“One awesome biodiversity project we’re working on with the community to support another web of life is restoring a kahikatea forest in Central Hawke’ Bay. Tucked on the Omakere flats surrounded by rolling hills is a small stand of straight and tall kahikatea, all that is left of the swamp forest that once dominated much of the area.”

“Swamp forests once fringed most water bodies and wet valley floors, but just about disappeared from New Zealand. The only truly pristine swamp forests remaining are on the West Coast of the South Island,” says Keiko.

“Luckily, we still have some small surviving remnants of this forest type in Hawke’s Bay. An exceptional effort by landowners to save two tiny areas has begun. It is so inspiring to see the community, schools, ecologists, regional council and landowners coming together to work on restoring these remnants, which are hundreds of years old.”

Project coordinator and Chair of the Biodiversity Guardians of Hawke's Bay, Kay Griffiths, says the pockets of forest have both seen better days, and need some aroha from the community.

“Kahikatea stretch up over 40 metres to touch the sky. Beneath and around them weeds such as willows, hawthorne and mercer grass compete and stop natural regeneration from taking place,” says Kay.

“Grazing by livestock over the years has eaten out most other native shrubs and trees. Naturally wet areas have mostly been drained. The tall kahikatea get no protection from surrounding trees and are battered by prevailing westerly winds. Slowly but steadily many of the ancient trees have succumbed to these pressures and, their giant trunks lie on the ground.

“An aspiration to repair this damage has emerged. These two pockets of under 5 hectares of forest are less than 20 kilometres apart in Central Hawke’s Bay – one near Elsthorpe and one near Omakere.

“Both remnants are on stations that have been in farming families for generations. Memories sit with the current landowners of what the forests used to be. Of bittern booming at dawn and dusk, teal flying low across the swamp, mud squelching between toes, the ground red with kahikatea seed. There is now a strong desire to restore those sights and sounds. Controlling weeds, excluding livestock and feral deer, ensuring seasonal flooding, and providing wind protection are all part of the first steps of doing so.

“Both landowners also want their local communities to have the opportunity to be involved in the restoration. Schools and locals are invited to help with seed collecting, growing plants and then planting them. Omakere School is already helping monitor the progress and changes at one of the sites,” adds Kay.

These restoration projects are funded and supported by the landowners of Amblethorn and Elgin Stations, Hawke’s Bay Regional Council, the Department of Conservation Community Fund, and Biodiversity Hawke’s Bay.