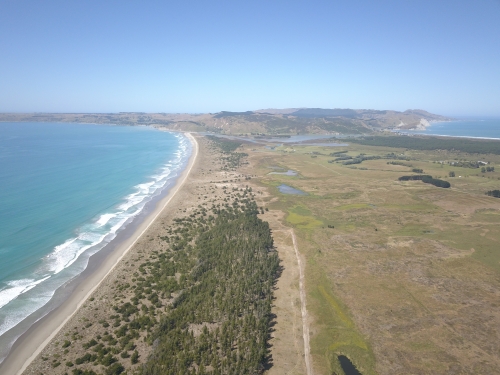 Community aroha and mahi have got a wetland restoration project off the ground in Mahanga.

To celebrate International Biodiversity Day on 22 May, the Regional Council is highlighting good biodiversity mahi going on round the region. This Wairoa project shows the impact a focussed community can have.

"This is a wonderful turn around and a victory for our endangered wetlands and sand dunes ecosystems,“ says Malcolm.

The Regional Council identified the wetlands as ecosystem prioritisation sites, which means there is funding for the project and support from the team says Regional Council Acting Manager, Catchment Services Mark Mitchell.

“Working alongside DoC and our team, Pahnui Farm in Mahanga is in the process of retiring 20 ha of wetlands along the Pukenui beach,” says Mark.

“These rare ecosystems have been damaged overtime by stock and drainage around the region, but with this mahi they will begin to return to their pristine conditions thanks to community efforts. Wetlands host a number of rare taonga including the Matuku (Bittern) and Mataata (fern bird), as well as several rare plants.”

Neighbouring tangata whenua landowner says “I am excited about this community project as its vision is to expand its footprint further to neighbouring blocks and re-establish native plants right along the wetlands”.

Healthy and functioning biodiversity is one of the Regional Council’s priorities is for Hawke’s Bay.