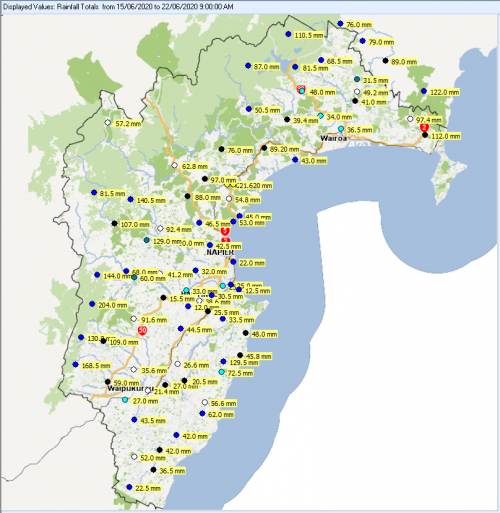 Rainfall over the weekend has signalled the end of the meteorological drought across parts of  Hawke’s Bay to the relief of farmers, yet there remains a critical feed deficit.

“We’ve had a solid amount of rain over the past week. Up to 200mm in the western ranges and 25-40mm on the Ruataniwha and Heretaunga Plains so rainfall totals are looking a lot healthier,” says Dr Kozyniak.

“We’re now heading into above normal rainfall territory for our June totals, and the Kaweka and Ruahine ranges have hit that mark. The only area of the region that is still below normal is northern Hawke’s Bay. Soil moisture has recovered well and in most places is above median levels and hit field capacity.”

“River flows are back to normal and we’ll know later on whether groundwater levels have come back to normal levels for the time of year.  Winter recharge of our aquifers is important to set us up for spring and summer.”

If the aquifers are around normal we’ll be satisfied though we haven’t caught up in terms of annual rainfall for the July to June year, sitting at about 70% currently, she said.

“We’re getting a series of lows tracking across northern NZ which is keeping an easterly flow over Hawke’s Bay and we can expect modest amounts of rain later this week.”

Rural Advisory Group co-chair Lochie MacGillivray says the recent rainfall is good for farmers across the region who have experienced a particularly prolonged drought.

“As the weather has been both consistent and mild it will generate higher than average pasture growth,” says Mr MacGillivray. “The consequence of this will be a boost in helping our farmers ability to navigate through this winter.

“While this rain has been marvellous, for many it has come too late in the season and the impacts of the drought will remain for some time. Many farms will be still facing a significant feed deficit even with this higher than normal pasture growth.”

Farmers who feel that they are in this feed deficit position are encouraged to ring the Beef & Lamb feed budget support number on 0800 23 33 52.

Farmers can find out about the advice and support on offer on the Regional Council’s drought hub.

To apply for the Hawke’s Bay Drought Relief Fund to help with transporting feed to the farm, go to the application form for the drought relief fund.

People can call the Hawke’s Bay Regional Council on 0800 108 838 for more information about the drought relief fund.

The Rural Advisory Group are raising funds to support the transportation of feed to farmers, you can support our farming community with our givealittle appeal.