Horse the kiwi chick starting life with a light footprint 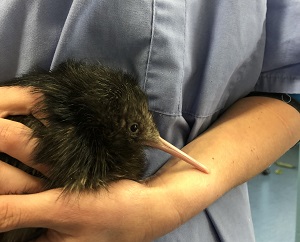 There will be no horsing around for the all-important mission of getting newly hatched eastern brown kiwi chick Horse to his new home.

Horse, recently hatched at The National Kiwi Hatchery in Rotorua, needs to get to a Napier based creche to grow bigger and stronger before being released back into the wild.

The Hawke’s Bay Regional Council has just the man for the job, ex-military and corporate asset and support lead Marcus Hayes-Jones, who will transport Horse in an electric Nissan Leaf this Monday, October 19th.

“I jumped at the opportunity to transport our treasured national bird to where it needs to go, and to do it in a sustainable way.”

“This will also be a fantastic way to demonstrate how you can effectively use an electric vehicle for all types of tasks. I’m aiming to drive the return Napier to Rotorua journey without stopping for a charge.  I’ll be driving 222km, and the Leaf has a range of about 265km.”

Marcus is setting off from the Council’s Dalton Street offices at 8am on Monday and will ensure that the National Kiwi Hatchery can track his whole journey on Google maps.

Thanks to Mercury, the National Kiwi Hatchery has 2 EV chargers onsite for visitor use. These are charged using solar panels, also kindly donated by Mercury – making this car trip even more sustainable.

Marcus says his main focus will be making sure that Horse gets to where he needs to go as safely and efficiently as possible.

Horse will travel in a special carry box to keep him safe and warm. These boxes are nice and dark like a kiwi burrow and filled with moss and fern leaves.

It works with conservation groups to locate and collect kiwi eggs from 15 different forests across the North Island. The team of experts at the hatchery incubate the eggs, hatch and rear the kiwi chicks.

The kiwi creche in Napier, run in partnership by national charity Kiwis for kiwi and Napier City Council, had its first residents arrive earlier this week.

Chicks will live at the creche until they’re around 1kg in weight and able to defend themselves against stoats (about six months), before being released back into a predator-managed forest.

The creche will have a big part to play in boosting numbers of the eastern brown kiwi, which is the most vulnerable variety of North Island brown kiwi.