Transported to the future – what do you think? 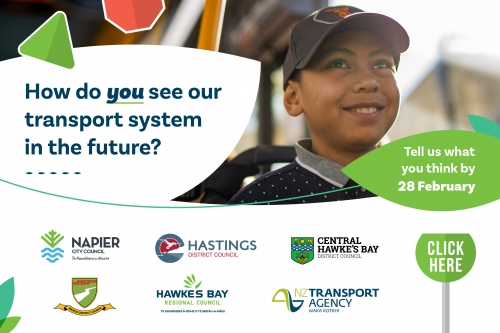 The community is being encouraged to have their say on a plan for the future of Hawke’s Bay’s transport network.

“We’re talking about three major priorities in this plan; safety on our roads, providing better, sustainable transport choices for people, and ensuring we have an efficient and reliable transport network, particularly for freight,” says Cr Williams.

“Any death or serious injury on Hawke's Bay roads is one too many. Last year alone, 22 people died on our roads. We want to get that number down by at least 40% in 10 years, but we need the community’s backing and support to get there.”

Cr Williams says the region is staring down the barrel of climate change and the need to improve the health of the community with 70 percent of Hawke’s Bay overweight or obese. He says the Plan looks at investing public and active transport to tackle both of these major issues.

“Hawke’s Bay has a much higher private car ownership rate than it did 20 years ago, and an unhealthy dependency on private vehicles to get around. It’s like we are addicted to cars. We’re aiming to get 30% of people travelling to work out of their cars, and a similar mode shift for students,” he says.

“Getting more people out of their cars, on the bus, biking, or walking will go a long way to meet our objectives. But we need to provide useful, accessible, and affordable options so people actually take up the alternatives.”

Cr Williams says it’s also important that freight can move around the region efficiently and reliably.

“Our transport network needs to be able to handle the movement of all the fruit, logs, meat and everything else that is vital to the well-being of our community.

“I’m encouraging the community to have their say on this – it’s our future, and what you say matters. But as I see it, this Plan can’t be just about building more roads, or rolling out yesterday’s solutions to tomorrow’s problems”.

These organisations promote transport priorities through the Regional Land Transport Plan while securing local funding through their annual and long-term plans. These projects are prioritised in the regional plan, and then prioritised nationally by Waka Kotahi.

Have your say by 28 February.